Passing mention of Aleister Crowley and Jack Parsons in an interview about a Lovecraft documentary.

Passing mention of Aleister Crowley and Jack Parsons in an interview about a Lovecraft documentary “Lovecraft: Fear of the Unknown” [Amzn].

“LNN: What were the most rewarding, challenging, and insightful moments in making your documentary?

Woodward: When you’re interviewing talented and knowledgeable artists like Guillermo Del Toro, Neil Gaiman, Peter Straub and Caitlin R. Kiernan, it’s impossible not to gain new insights into life let alone Lovecraft. Guillermo Del Toro recommended a book called Sex & Rockets which is all about the life of JPL co-founder Jack Parsons (a man who was a disciple of Aleister Crowley, practiced sex magic with L. Ron Hubbard, and died under mysterious circumstances while summoning “something” into his home).” 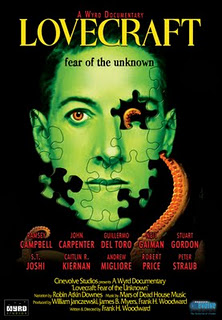 “LOVECRAFT: FEAR OF THE UNKNOWN is a chronicle of the life, work and mind that created these weird tales as told by many of today’s luminaries of dark fantasy including John Carpenter, Guillermo Del Toro, Neil Gaiman, Stuart Gordon , Caitlin Kiernan, and Peter Straub.”