The Red Book by Carl Jung

From a few days ago, images from the forthcoming Jung’s The Red Book, which if you haven’t seen yet, you should see at The Red Book by Carl Jung. 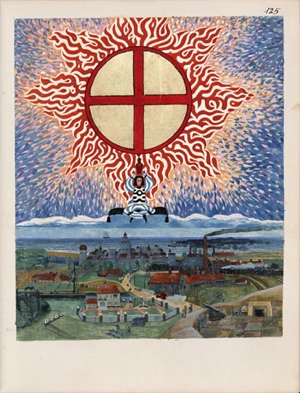 “During the first world war, Carl Jung embarked on an extended self-exploration he called his ‘confrontation with the unconscious’. At the heart of this exploration was The Red Book, a grand, illuminated volume which he created between 1914 and 1930, in which he developed the nucleus of his later theories.

The book is a remarkable blend of calligraphy and art; an illuminated manuscript that bears comparison with The Book of Kells and William Blake. But while Jung considered The Red Book his most important work, only a handful of people have ever seen it. Finally, nearly 80 years after it was completed, it is available in a facsimile edited by Jung historian Sonu Shamdasani and published by WW Norton. View a handful of the pages here.”

I ran into this again today when I was doing a search on William Blake. So, you know, if you’d rather, check out this blog about William Blake: Psychology and Religion instead.

Here’s a more narrative article about the book from back in Sept, if you’re interested in more information at The Holy Grail of the Unconscious.

Apparently, some people are already getting their copies. Here’s someone posting about it at Red Book. Check out the size of the book in that last photo! She says, in that post, “opening the pages is like seeing the work of William Blake for the first time.” Now, that’s saying something!