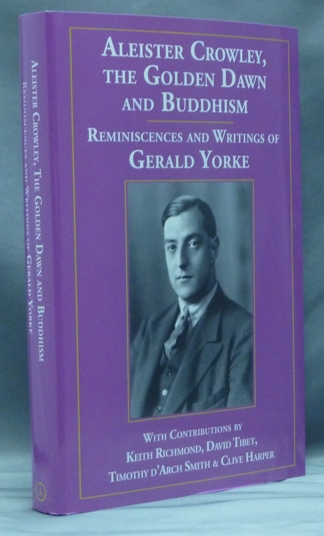 You may be interested in a new book, being published by Teitan Press (though for some reason it does not appear on their website): Aleister Crowley, The Golden Dawn and Buddhism: Reminiscences and Writings of Gerald Yorke. Edited by Keith Richmond, with contributions by David Tibet, Timothy d’Arch Smith and Clive Harper.

“Aleister Crowley, The Golden Dawn and Buddhism comprises a series of 20 essays by Gerald Joseph Yorke, set down over a thirty-year time-span.”

“Gerald Yorke’s interests are reflected in the essays and lectures which are published together here for the first time. Most of these pieces were groundbreaking: his short memoir of Crowley was the first sympathetic biographical piece of any length to be published after The Beast’s death, and his essay on Crowley’s O.T.O. and sexual occultism is the first clear account of the subject in the English language. His essays on ritual magic are unique in their matter-of-factness and sanity, and his writings on the Golden Dawn arguably mark the beginnings of historical research into that group. He also wrote knowledgeably on subjects such as Yoga, Tantra, Mantra and Zen at a time long before they had become common terms in the West.”

“Above all, Yorke’s essays offer a rare blend of straightforward scholarship and genuine first-hand experience.” [via]

Currently on offer through Weiser Antiquarian in trade edition and deluxe edition.