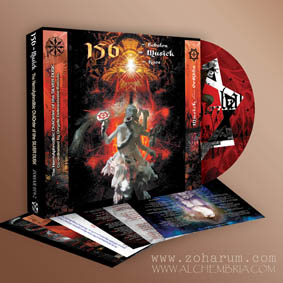 You may be interested in a new release by Orryelle Defenestrate-Bascule & The HermAphroditic ChAOrder of the SILVER DUSK through Zoharum Records called “156=Musick=Babalon=Kaos”. This limited release of 156 copies is currently on pre-order, set for release on Jun 21st, via Alchembria in Poland.

“The Silver Dusk’s 156 = Musick Project is an experiment of Process: Magickal Musick was recorded by members of The HermAphroditic ChAOrder of the SILVER DUSK -usually in ritual context or with invocational intent- then posted on CD to other member/s in another country for them to add more layers to. This continued progressively until completion.

The style of music ranges from neoclassical ambient orchestral multi-instrumental corroborations and layered electronic experimentations to simple primal ritual corroborees with sticks and bells and harmonious voices around a fire by the Hekate Tree.

Included are several live improvisations from when various members converged physically in different locales: From the initial 9-person onstage live jam of ‘She Shall Ride He’ in Melbourne Australia 2004 which launched the project synchronous with others starting tracks in the US and Korea, to the harmonics of the 12 participants in the EquiNOXULiuqE Circle in Hekate’s Grove in Seattle, Sept 2010.”

You can also check out a trippy flash promo on Orryelle’s site: 156=Musick