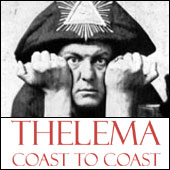 The newest section of the library is the official static archive of Thelema Coast to Coast, a podcast that was dedicated to the exploration of Thelema, Aleister Crowley, the New Aeon, ceremonial magick, and the occult. As the official archive, the old domain thelemacoasttocoast.com is now pointing to the library, and many of the podcast sites have already begun to show the new location for the show and the podcast audio files. So, you may want to go take a gander at the new archive of this podcast.

Last week I was contacted by John L. Crow, who was the person behind the podcast, about whether I’d be interested in being the new home for the site and all the files. He had seen the work I’d been doing on several previously difficult to find articles at The Meditations of Allan Bennett and my work on the recently added guest site The Enochian and Thelemic Works of David Richard Jones along with several of David Richard Jones’ historical sites, such as Invisible College; and thought that the library would make a great new, permanent home for Thelema Coast to Coast. So, I spent a bunch of time converting the old WordPress site into a static archive, and checking that all the files where there. This was actually something similar to what I’d done when I created the mirror for The Eidolons of Ash, which was originally built on top of Mediawiki. The result you can see is only slightly different in appearance from the original dynamic site, but is actually improved a bit behind the scenes and now all the comments are closed.

Not only are all the show files available, but you may be interested in a few pointers to some interesting things. First, there’s the really fun Postcards page which displays images of a number of artistic things sent to the podcast via postal mail as part of a sticker giveaway promotion. There’s also archived on the site Episode #0, Promo (which only appears in the RSS feed) and an Enhanced Podcast available with slides of the lecture linked in the show description for Episode #19.

I’ve also been given permission to run the old Thelema Coast to Coast swag shop, as a way of offering some nostalgic items but also to help support the library in offering space for preservation of these and other sections of historically interesting materials. I promised to buy John one of the mugs if I actually have people get enough of the swag to cover the costs of it, so, you know, help out with that if you’re interested in having a souvenir.