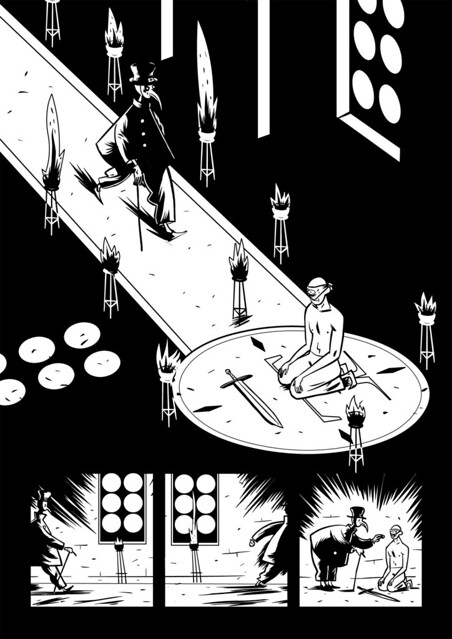 This is a rather striking image, in high contrast black and white, from a 6 page story that was done for a publication called Fanzine Enfermo.

“This is a page of the thelema comic i’ve just finished for my pals of Fanzine Enfermo. As i told you previously it’s inspired on the works of Kenneth Anger and Aleister Crowley. I’m not a believer in these things, but find fascinating the feelings that some works of Anger make feel, and want to put them on paper as he had put them in screen.”

Don’t know what the other pages look like, but I’m certainly curious and interested. I’ve been looking online for more information to share about Fanzine Enfermo, but haven’t located a link specifically about it; though there are lots of interesting illustrations to be found searching on that term.

The black and white style reminds me a great deal of the style of The Marvel: A Biography of Jack Parsons by Richard Carbonneau with art by Robin Simon Ng; which was published by Cellar Door.