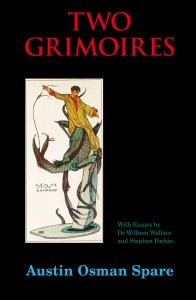 You may be interested in Two Grimoires [also] which is coming from Starfire Publishing, and available for pre-ordering in the US through J D Holmes.

“This long-awaited title will at last be published in September 2011, and is now available for ordering ahead of publication.

Two Grimoires is a sumptuous, sewn hardbound book, Octavo format, 156 pages, with a full colour dustjacket, and limited to 1000 copies. Included is a 48 page section of colour plates, a colour frontispiece, and a black and white endpiece. The core of the book is the publication for the first time of two elaborate book dummies by Spare which he produced during the years 1905 and 1906. Each consists of more than twenty finely-drawn pen, ink and watercolour images, in some cases accompanied by brief captions. Internal evidence suggests that they were intended for publication, but were never completed. Their publication here is accompanied by two finished pictures by Spare from the same period, incorporating elements from the grimoires. Accompanying the grimoires are an Introduction by Michael Staley and two illustrated essays of commentary and preliminary analysis by William Wallace and Stephen Pochin.”

“The first of these grimoires, entitled The Focus of Life & The Papyrus of Amen-AOS, is dated 1905-6. Much of the lettering remains in pencil, some of it giving clues to the underlying meaning of the imagery. An important element of this grimoire is that it features an early form of the ‘exteriorisation of sensation’ which Spare subsequently developed into the Sacred Alphabet which is a feature of The Book of Pleasure.

The second, slightly later notebook is The Arcana of AOS & the Consciousness of Kia-Ra, dated 1906. This is in some ways the more finished of the two notebooks, and picks up some of the imagery from the earlier notebook as well as adding some new elements.”