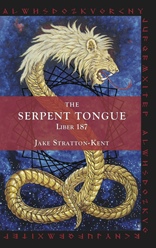 You may be interested in The Serpent Tongue: Liber 187 by Jake Stratton-Kent, which is forthcoming in October from Hadean Press.

“A workbook of English Qaballa by Jake Stratton-Kent, with an introduction by Lon Milo DuQuette and cover art by Stuart Littlejohn.

The Serpent Tongue: Liber 187 was first published online in 2000 by Ye Olde Goat’s Shoppe and made available for personal use only. With the 2008 reappearance of The Equinox: British Journal of Thelema, in whose earlier incarnation much of the writing contained herein was first published, and subsequent renewed interest in the English Qaballa, permissions were obtained for the publication of a newly revised edition.”