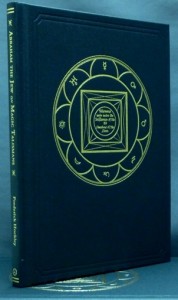 You may be interested in Abraham the Jew on Magic Talismans now available through Weiser Antiquarian Books and published by Teitan Press.

“Abraham the Jew on Magic Talismans is a previously-unpublished manuscript by Frederick Hockley, probably transcribed by him circa 1850 from an earlier work. The manuscript deals with the creation of talismans, and is divided into two parts, the first of which details methods for their manufacture ‘under the fixed stars’ and the second ‘under the twenty-eight mansions of the moon.’ Both sets of concepts were popular in mediaeval and later European astrological and magical practice, having apparently been incorporated into them from Arabic astronomical and astrological treatises composed during the ‘Golden Age’ of Arabic science from the middle of the eighth to the middle of the thirteenth centuries.

This first published edition comprises an Introduction in which Silens Manus explores the history of the manuscript, and it’s relationship with other early magical works, notably those of Cornelius Agrippa. It is followed by a typeset transcription of the text of the manuscript, with explanatory footnotes, etc., and a reproduction of various relevant passages from the 1651 edition of Agrippa’s Three Books of Occult Philosophy. The final section is a facsimile of the original manuscript, printed on special coated paper that gives a photograph like quality to the reproduction.”