A Book of the Offices of Spirits is now available from Teitan, via Weiser Antiquarian.

A Book of the Offices of Spirits

The Occult Virtue of Plants and Some Rare Magical Charms & Spells

With an Introduction by
Colin D. Campbell 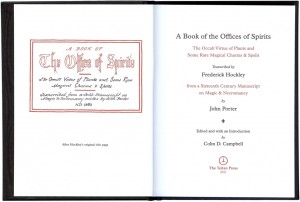 “‘A Book of the Offices of Spirits’ is the first ever publication of this Solomonic text or grimoire which, in common with the better-known ‘Goetia,’ is essentially a catalog of demons, giving their name, description, rank in the infernal hierarchy, number of attendant legions, offices (abilities), as well as a variety of magical rituals for their conjuration and other purposes. The text has its origin in a magical manuscript written by one John Porter in 1583, which was itself probably drawn from earlier European sources. In the early nineteenth century the Porter manuscript came into the possession of the British occult fraternity, ‘the Mercurii,’ and a transcription of key sections was compiled by John Palmer. Palmer’s transcription was in turn copied by the renowned occult scholar Frederick Hockley, and this transcription, along with another anonymous late nineteenth century manuscript copy, for the basis for the present work.”