Lost Lucifer Rising soundtrack by Jimmy Page revisited, remixed and released today, and available now, via the Jimmy Page website at “LUCIFER RISING AND OTHER SOUND TRACKS“. Prices are pretty high, starting at £20 (that’s over US $30) for the standard edition, a £30 deluxe edition limited to 418 copies, and going all the way up to a signed and deluxe edition, limited to 93 copies, at £195. However, it may be too late to get either of the deluxe editions until they start being scalped at unconscionable markup later. 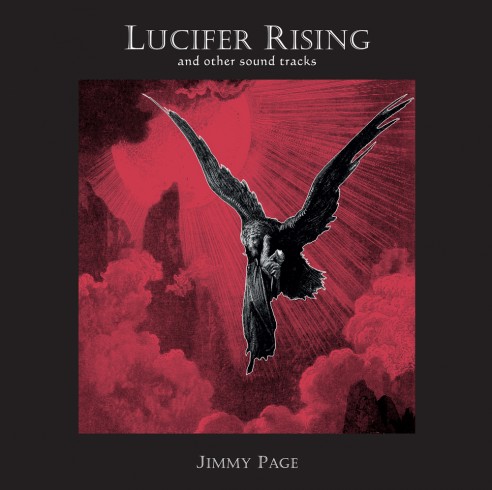 “Today, the Spring Equinox 2012, the title music for Lucifer Rising and Other Sound Tracks will have its premiere and release.

The title music, along with other musical pieces recorded at my home studio in the early Seventies, have been revisited, remixed and released for the first time.

This is a musical diary of avant-garde compositions and experiments, one of which was to appear on the film Lucifer Rising.

The collection has been exhumed and is now ready for public release. This will be available exclusively on the website.

There will be a standard release on heavyweight vinyl.

In addition there will be a special run of 418 numbered copies. The first 93 copies will be signed and numbered.

There are liner notes and commentary to each track. The tracks are:

Side One
1) Lucifer Rising – Main Track

“A lost soundtrack recording from the early 1970s by Jimmy Page has been ‘revisited and remixed,’ according to the legendary Led Zeppelin guitarist — and will finally see release on Tuesday, March 20.

‘I was really nervous because the opening sequence is a dawning sequence which brings comparisons to the film 2001, A Space Odyssey to mind,’ Page said, in an interview during the ongoing sessions for the original soundtrack recording. ‘The film was shot in Egypt and I wanted to create a timelessness so by using a synthesizer I tried to change the actual sounds of every instrument so you couldn’t say immediately ‘that’s a drum or guitar.’ I was juggling around the sounds to lose a recognizable identity as such. In 2001, a Space Odyssey there was fantastic music done with voices. I wanted to attempt to do that with Zeppelin in the beginning.'”

“Page’s rough drafts — which took on something of a legendary status over the years, and were included on countless bootlegs, notably Solo Performances — have now been fleshed out, and will be available exclusively through JimmyPage.com.” [via]

“Yesterday we reported on Jimmy Page’s new album Lucifer Rising and Other Sound Tracks, which will be released on March 20 via his website. Today, we have discovered a 2006 interview with the Led Zepplin guitarist that goes into detail about his unreleased score of the 1972 film that forms the bulk of the new album.” [via, 2006 interview]