Baba Yaga and the Wolf

You may be interested in Baba Yaga and the Wolf by Marek Colek and Pat Shewchuk, published by Tin Can Forest. 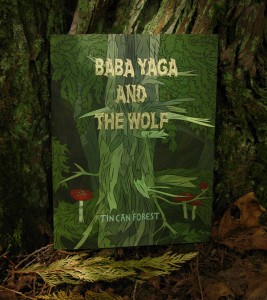 “‘This is a story told to me by my great grandmother. She lived in a time when the wilderness was everywhere, vampires roamed the treetops, and devils traded opium and vodka for human souls by the roadside.

My great grandmother lived to be a hundred and ten years of age, and until her dying day could walk a hundred kilometres through the rugged mountain trails near her home village. She knew witches who practised occult alchemy, and with her own eyes witnessed animals take human form. Baba Yaga and the Wolf is a true account from the old days, when the heavens and the underworld existed in closer proximity to the earth than today.’

Visually influenced by the dense forested landscape of British Columbia, Baba Yaga and the Wolf tells the story of Katerina and the journey she takes to the edge of the Underworld and its gatekeeper, Baba Yaga, in order to save her husband Ivan from a terrible fate.

A deity whose beginnings are twisted and tangled in the origins of Slavic folklore, Baba Yaga has been interpreted as many things: as a patron goddess of the land and those who toil upon it; a benevolent guide, spinning tales of life from the flesh and bone of the dead; and as a guardian of the Underworld, a sentinel tasked with keeping the souls of the dead from being redistributed to the newborns of the living world—unless she desires it to be so. Hidden in a cottage that sits upon hen’s legs, buried in the deepest corner of a dark and inhospitable forest, Baba Yaga can at once be a saviour to those who seek her out, or a manipulator, tricking unknowing souls into giving that which is most precious, most prized.

In Baba Yaga and the Wolf, Marek Colek and Pat Shewchuk, drawing inspiration from early Russian animated films, Slavic mythology, and symbols and pictography associated with the many iterations of the Baba Yaga mythos, have given new breath to an age-old cautionary tale of being careful to voice that which one most desires in a world where every leaf on every branch on every tree might be aware of such wants and the darkness that exists at their root.” [via]