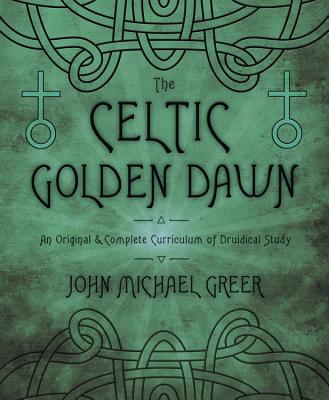 “A century ago, groups decending from the famed Hermetic Order of the Golden Dawn fused the occult lore of the Western magical tradition with the nature spirituality of the Druid Revival. They invoked Pagan Celtic powers instead of the Judeo-Christian names and symbols. Respected occult author and Grand Archdruid John Michael Greer has re-created a complete magical system based on the Celtic Golden Dawn traditions. This new book provides students with a complete curriculum of Druidical magic and occult wisdom, including training in ceremonial magic, meditation, pathworking, divination, geomancy, and herbal alchemy, allowing self-initiation into the three degrees of Ovate, Bard, and Druid. It features spectacular magical techniques for such things as invisibility, etheric shapeshifing, and conjuring spirits.” [via]

Although the book description doesn’t say so, I’ve seen some comments which state this work has to do with the Celtic Revival of William Butler Yeats, and will cover materials related to Yeats’ attempt to create rituals for his Castle of Heroes and a neo-romantic reconstruction of Celtic Mysteries which was his focus for a time. I was curious whether that was the case, so I asked John and he clarifies:

“Since only fragmentary material survives from the Druid/Golden Dawn hybrid orders of the early 20th century — orders such as the Cabbalistic Order of Druids and the Ancient Order of Druid Hermetists — the sole available option was for someone with a solid grasp of Golden Dawn and Druid traditions to reverse engineer a fusion between them. Since I have the qualifications, I decided to give it a shot. The completed system is an original creation of mine, based on my sense of what the study program of such an order would have been like.” — John Michael Greer [via email]

1 thought on “The Celtic Golden Dawn: An Original & Complete Curriculum of Druidical Study”