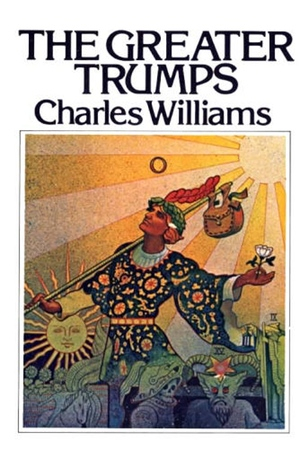 The Greater Trumps is one of Charles Williams’ cycle of occult fantasy novels, and this is the one that foregrounds the tarot. I found it less engaging than War in Heaven or Many Dimensions. It has a few interesting visionary episodes, but the characters are fairly static, and the plot, although conveying a real sense of distress, neither excites nor illuminates the reader. The book will be most enjoyable to those with some prior orientation to tarot symbolism, and in particular a knowledge of the central images of the trump series. But such readers should not assume that their own understanding of the tarot informs this novel.

Williams is said to have been an initiate of the Fellowship of the Rosy Cross, a Christian magical order descended from A.E. Waite’s Golden Dawn schism. It was a little surprising to me that the tarot symbolism in his book departs so far from the system of correspondences developed in the Golden Dawn. There is no use of Tetragrammaton as a key to the minor suits, and the element of Fire is attributed to Swords, while Air is assigned to Wands, in the manner of Gardnerian Witchcraft. The particular “Greater Trumps” of the novel are the usual array, but numbered in an unaccustomed sequence: Empress before High Priestess, and Emperor before Hierophant; Hermit numbered VIII, Temperance IX, Fortitude X, Fortune XII, and Death XIV.

This edition of The Greater Trumps carries a foreword by american writer William Lindsay Gresham, who lionizes Waite as THE great authority on tarot. While one might (I would) dispute such an award, it is fitting in reflections on the work of Williams, for whom Waite was certainly more important and useful than any of the competing figures of modern occultism. [via]