You may be interested in LVX = NOX an art portfolio with photography by Carlos Melgoza and an accompanying text by Frater Solus Altariora Laboro, which is available from Ouroboros Press. 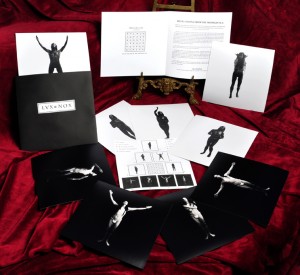 We are pleased to be offering these integral images of ritual gesture in a Limited Edition Portfolio and accompanying rite, The Revelation of the Midnight Sun.” [via] 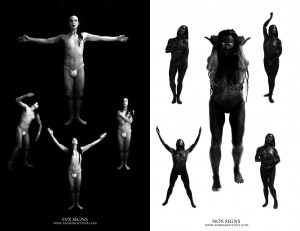 “These photographs are offered in a limited edition portfolio of Type C prints and limited to 26 numbered sets and include a copy of the rite, The Revelations of the Midnight Sun, penned by Frater Solus Altariora Laboro as an outgrowth of his work with the signs in ritual praxis.

Deriving from the western esoteric tradition, LVX & NOX Signs fall into a fascinating repertoire of ritual gestures and postures, mudras and asanas which can also be found in Tantra, internal martial arts such as Tai Chi, and dance such as Butoh. In this specific case the subjects are actual butoh dancers from the Seattle troupe Danse Perdue, given the physical quality of their work they were chosen due to their ability to embody the respective nature of the signs. In Tai Chi they first teach the form or frame, so that one knows how to stand so the energy is flowing. The sign itself is what defines the power. The signs are potent enough to also experience the power of the sign in a meditative space. Sacred postures are thought of as structural conduits of subtle energy. The different ritual postures which one shapes one’s body into conduct specific kinds of energy. The way forces are shaped defines how they act in manifestation. This relates to the magical gestures, the asanas, and especially the god-forms embodied in such ritual postures as the LVX NOX signs. As written in the accompanying text by Frater S.A.L., the combination of the light [LVX] and night [NOX] is what brings on the blacklight experience, an aspect of which entails a realization that that which is perceived to be separate is understood to be united. Thus the nine god-forms represent angles on an ouroboros-like wheel of universal force. In one form of the meditation these signs represent the totality of the universe as expressed in light and shadow. The totality felt through the flesh.” [via]