A Book of Sketches

A Book of Sketches by Aleister Crowley is a new release published by Teitan Press available from Weiser Antiquarian Books. 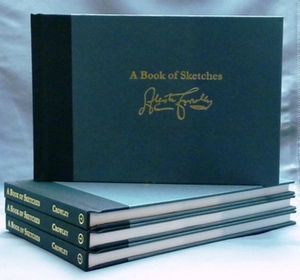 “A Book of Sketches reproduces in full a series of colour and black and white sketches, mostly of women, from a sketchbook utilised by Aleister Crowley from the late 1930s through the early 1940s that is now preserved in the Yorke collection in London. While the 45 plates include a number of finished drawings, most are unpolished designs, possibly “roughs” for later more detailed compositions. Although hardly examples of “high art,” they offer a fascinating glimpse of Crowley’s process of imagining his art, and the varied styles with which he experimented. Several of the portraits are identifiable as known lovers of Crowley’s, notably Catherine Falconer and “Alice” (probably Alice Sutherland – his mistress for more than three years), whilst at least one other appears to be a representation of his ill-fated wife, Maria (“Marie”) Teresa de Miramar. With a five page Introduction by Crowley art aficionados David Tibet and Keith Richmond.” [via]