The Faerie Queens, edited by Sorita d’Este and David Rankine, is due Jul 23rd and is available for pre-order from Avalonia Books. 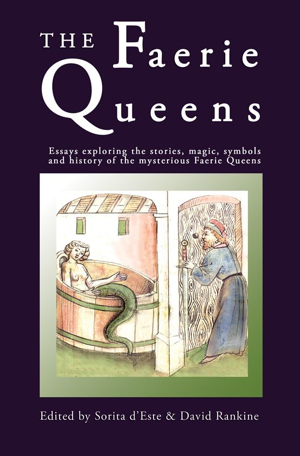 Powerful, mysterious, otherworldly, the Faerie Queens have spread their magic across Europe for many centuries, enchanting all who encounter them. From forests and lakes, mounds and mountains, the Faerie Queens emerge from the liminal places to bestow their numerous gifts (and curses) on man. Lover, shapeshifter, sorceress, prophetess, bestower of sovereignty, semi-divine ancestress, protectress of animals, collector of souls – the powers and roles of the Faerie Queens are as diverse as the folklore about them, their origins rooted deep in the legends, goddesses and beings of the ancient world.

Exploring the tales of many of the mysterious and captivating Faerie Queens, this exceptional anthology contains eighteen essays exploring the diverse accounts and themes associated with the Faerie Queens and their influence in magic, literature and folklore. From the Arthurian mythos to Scandinavia, from ancient Greece to Renaissance poetry and beyond, the awesome power of the Faerie Queens to inspire, challenge and transform is investigated and discussed from both scholarly and personal perspectives.”