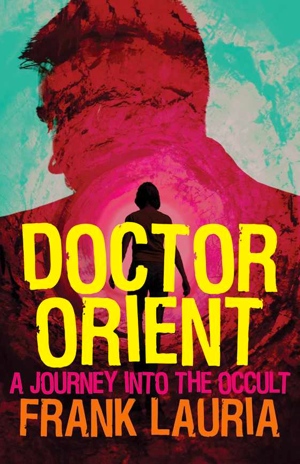 I read Doctor Orient hoping for pretty much what I got: The Devil Rides Out with discotheques. The title character Dr. Owen Orient has something of a Doctor Strange background, with some vague past training in Tibetan occultism, but the focus of his abilities is on telepathy, and he prefers a parapsychological idiom to an occultist one. I don’t much favor the hyperspace gobbledygook that Orient and author Lauria use to describe parapsychological phenomena, so it was a relief that the book’s events are trained on the occult as a result of the Satanist villain (who goes by “Susej”!) and Orient’s exorcistic ally the Roman Catholic Bishop Redson.

The fourth chapter (out of twenty-five) features a Satanic initiation straight out of the pages of Dennis Wheatley’s 1960 novel The Satanist, except with better fashion sense, and with more language from Aleister Crowley’s Gnostic Mass. In addition to using Thelema as a model for his fictional Satanism, Lauria seems also to draw on Scientology, with the devotional focus of the Satanists being the “Clear Power.”

Much of the novel is told (in the third person) from the perspective of Orient or his fellow psychics, which creates some rather incoherently impressionistic passages, to the point where I wondered once if there had been editing errors disrupting the continuity. But this technique works pretty well in the book’s climax, with a hallucinatory confrontation between Orient and Susej.

There are references throughout to a larger drama including Orient’s earlier incarnations and relationships in that context, with special reference to the goddess Urvashi, but these remain fairly unexplained even at the end of the novel. I understand that Lauria went on to write several sequels, so I imagine that these features get explored further there. (Better that than the parapsychology!) I’m not scrambling to get my hands on the rest of the series, but if the next one falls in my lap, I’ll read it. [via]