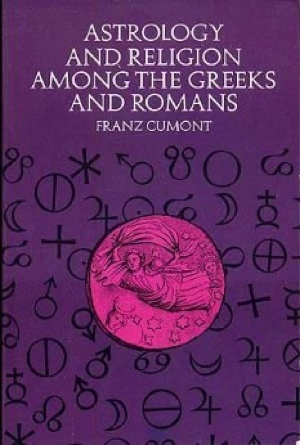 This slender book collects the 1911-1912 American Lectures on the History of Religions, as given by Franz Cumont late in his scholarly career (after his major researches in Mithraism, and his more general study of Oriental cults in ancient Rome). The six lectures divide into two sets of three: in the first three, Cumont provides a diachronic study of the propagation of astrology and “sidereal theology”; in the last three, he offers a synchronic description and analysis of the phenomenon at its classical acme in the Roman Empire.

As far as I’m aware, Cumont’s basic historical data in the first three chapters have not been a matter for correction or revision in the century since these lectures were given. They are dated only because of his recurring expressions of antagonism for the Pan-Babylonist historians of religion. This (mostly German) school of religious history embraced a radically diffusionist model for civilization with Babylon as its source. Ironically, Cumont agrees with them in assigning priority to the Mesopotamian cultures for observational astronomy and stellar theology. Where he disagrees quite strongly is the timeline. He absolutely refuses to credit the very early (multiple millennia B.C.E.) dating of the Pan-Babylonists, instead placing all significant developments in the 9th century B.C.E. and later. He also allows that some later astronomical accomplishments should be assigned to Greek sources. In addition to geographic spread, Cumont discusses how the ideas in question transitioned between elite and popular currency.

According to Cumont, the greatest exponent of religious astrology at its ancient peak was the author Posidonius, who taught Pompey and Cicero and influenced Philo of Alexandria. But none of Posidonius’ works survive. A myriad other sources allow Cumont to create a detailed picture of ancient astrological theology, ethics, mysticism, and eschatology. Students of esoteric religion should acquaint themselves with this material, because it is an implicit context for so much of the magic and mysticism of the ancient and medieval worlds alike. As Cumont notes, it was not until Copernicus and Galileo inaugurated the obsolescence of the Ptolemaic system that these ideas suffered decline. And even so, there has been little to replace them on many fronts. [via]