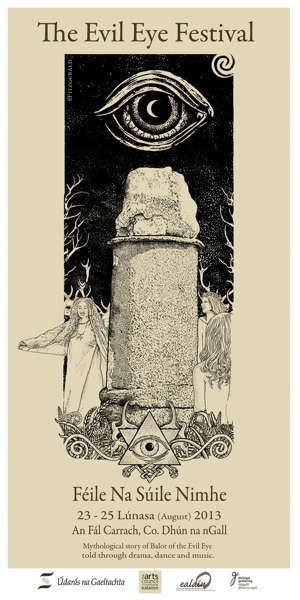 “In days of yore, far back in the night of time, a giant warrior lived among us. This giant, whom they called Balor, was feared by all because of his evil eye which could strike you dead with one glance of his foul and distorted vision.

The Evil Eye Festival aims to tell the story of how our parish – Chloich Cheannfhaola – got its name at the hands of Balor of the Evil Eye and how his wicked deeds eventually led to his own demise!

If you have a love for Celtic Mythology and archaeology then we invite you to join us for our Evil Eye festival. The festival aims to tell the story of how our parish – Cloch Chionnfhaolaigh – got its name at the hands of Balor. Watch the story unfold through live dance battles, giant puppetry processions,music and outdoor drama reenactions. Visit the archaeological sites of this small kingdom of Sli Lugdach whose people worshipped the pagan god Lugh. Witness the slaying of Balor by the pagan god and celebrate the victory with wine and music!

We invite International scholars of Irish studies and archaeology and all our friends abroad to this unique festival!” [via]