LeMulgeton: Goetia and the Stellar Tradition

LeMulgeton: Goetia and the Stellar Tradition by Leo Holmes is a new release available directly from Fall of Man in physical and digital editions. There are also a number of images of the book on their social networking page and a sample chapter on the website. 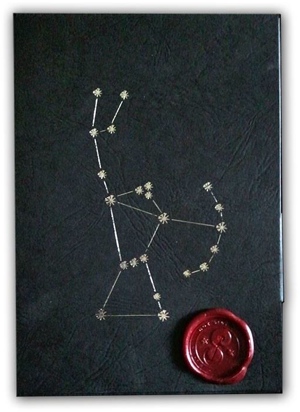 “Most of The Ars Goetia readers, if not all, are much more interested in what they can get or do by using it than in its origins. But how did it arrive to our days? What, or who, are the subjects in the book? Why 72 and what do their classifications mean? What can their depictions say about them? A lot of questions remain, and it is the aim of LeMulgeton: Goetia and the Stellar Tradition to point towards where some of those answers can be found.

Throughout the pages of this work, the author attempts to relate both Lemegeton and Mul.Apin (a Babylonian compendium that deals with many diverse aspects of Babylonian astronomy and astrology), attributing the Goetics to the Sumerian Constellations (which include single stars and planets) neglecting the prose’s linear flow for the sake of mythic astronomical approach. For that, the author analyzes every possibility – similarity in names, coincidental depictions, mythological attributions and even Constellations’ modern names – following the order in which the demons are presented in Lemegeton. These associations are not to be taken dogmatically though, but rather serve as a pragmatic working table to stimulate contemporary magicians to further develop knowledge and practice on these matters. Mul.Apin and Lemegeton are apophenic (and pareidolic) maps whose sole intent is to serve as a medium for keeping alive a knowledge which is probably as old as human nature. Therefore, those associations are temporary, ever revolving, just like the stars they are about.

The aim of LeMulgeton: Goetia and the Stellar Tradition is to attend a call and to re-establish a long lost connection with the Elder Gods.” [via]