Hermetic Library fellow T Polyphilus reviews The Emergence of the Laity in the Early Church by Alexandre Faivre. 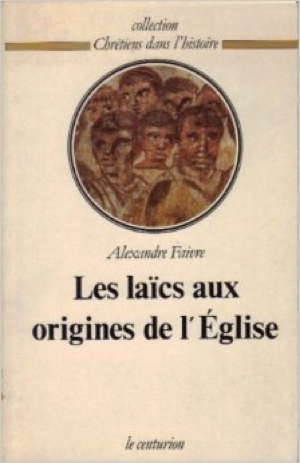 This volume is a fairly comprehensive treatment of the idea and social phenomenon of church laity in the first half-millennium of the Christian era. For the first 40% of that period, according to author Faivre, the laity did not even exist as such, and it was only in the third century that the laity followed the clergy into being as a distinction within the larger population of Christians.

“The layman is a strange being, subject to mutation, born the prisoner of an analogy, conditioned by a climate of conflict and formed in a cultic environment. There is nothing to indicate that this mutating being should be called upon to become a species.” (21)

Early factors in the development of a concept of laity were the growth of church populations, official persecutions, and efforts to define the nature of the clergy. Other pressures came into play after Christianity was endorsed and subsidized by the empire. The rough arc traced in this book is one from the nonexistence of laity, to its presence as a virtuous subset of male Christians (from which clergy might be drawn), to its role as a mutually-exclusive and inferior complement to the clergy. Finally, the monk is introduced as a tirtium quid, drawing at first on lay aspirations alien to the administration of the church, but quickly becoming implicated with the clergy in a complex economy of holiness.

Faivre is a French Catholic academic, and he seems to handle his sources fairly. In his conclusion, he suggests that 20th-century concerns with the status and powers of the laity were paralleled by the tensions and mutations evident in the early centuries of the church, and he proposes that these are evidence of a major historical transition in the relationship of Christianity to society. [via]