Here’s a summary of activity for the week ending October 12th, 2013. 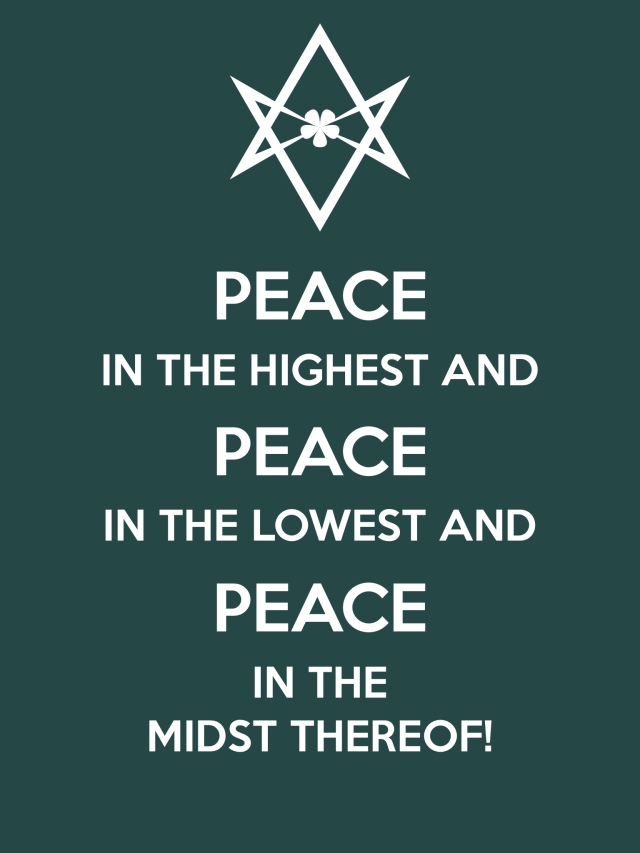 This Unicursal PEACE PEACE PEACE Poster is another piece of helpful propaganda from the Ministry of Information, a take on the original trilogy of British posters from WWII combined with a quote from Aleister Crowley‘s The Vision and The Voice in The Cry of the 23rd Aethyr, Which is Called TOR.

There are merely a couple of days left to the Fall 2013 call for submissions for Magick, Music and Ritual 9 is open. Deadline for tracks is on October 15th, with a planned release around astronomical Samhain, when the Sun is at 15° Scorpio, which will be November 7th.

Autumn added by AnimaMundi
Tomorrow Never Knows, a Beatles cover, added by Cowslanlr
Descent added by AnimaMundi
Ain Soph added by R Collier-Ford
Pimeyden ruhtinaan nimeen is an Ammattisikiö track added by Utu Lautturi
These Are Not Tears, a collaboration with Dave Migman, added by Audiothrillseeker
She Was A Psycho Killer! added by Monk Zylo

Fumigations of the Seven Planets by S Aldarnay, is a recent release from Hadean Press
NUIT fashion
Goddess Nuit Kitty from The All Seeing Cat
Strange Factories, a new film written and directed by John Harrigan from FoolishPeople

The Primal Grimoire is a new web-based forum organized around the work and legacy of Kenneth Grant and the Typhonian Mysteries
Ouija Coffee Table
Dangerous Minds punks out before attending Aleister Crowley’s Gnostic Mass
Retreat! by Sharon Jones & The Dap-Kings
Music the Dead Can Hear at Observatory on Nov 8, 2013 at 8pm
It’s Aleister Crowley’s Birthday