A Fascinating New Publication and an intriguing selection of Secondhand, Old, and Rare books

You may be interested in Weiser Antiquarian Book Catalogue #112: A Fascinating New Publication and an intriguing selection of Secondhand, Old, and Rare books. 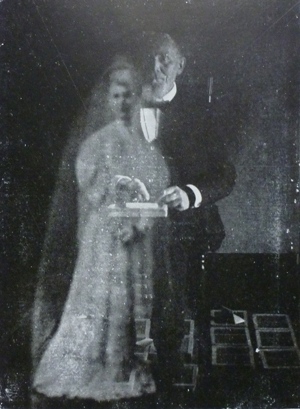 “The catalogue starts with a listing for a delightful new limited edition book of the “inspired” art of the remarkable Madge Gill (1882 – 1961) and her non-corporeal collaborator Myrninerest. The book is edited by David Tibet and Henry Boxer, and comes in two versions with copies of the Special Edition including an original artwork by Gill.

The rest of the catalogue comprises a selection of books and journals relating to Spiritualism, the Occult, and Psychical Research. Amongst the rarer items are the only known copy (none are listed as being held by libraries) of Issue No. 1 of the Journal of the London Lodge of The Faery Investigation Society (1929), an inscribed copy of Dr. John Bourbon Wasson’s Modern Spiritualism Laid Bare (1887), Sir Oliver J. Lodge’s own copy of the first edition of his Phantom Walls (1929) with his hand-written corrections; and James Lawrence’s Angel Voices from the Spirit World (1874) a rare work which presents various communications “from the other side” on diverse topics such as “Which Should be the Head of the Family — Man or Woman,” “Woman’s Rights,” and “Celibacy — is it in Conformity with Nature’s Laws that Man and Woman Should Practice it?” Other interesting works include Stuart Cumberland’s Spiritualism — The Inside Truth (1919), in which the author recounts a seance he attended where the medium correctly described a number of hidden objects, including a medal that had belonged to Sir Arthur Conan Doyle’s dead son, and a small medallion that belonged to W. Wynn Westcott (founder of the Hermetic Order of the Golden Dawn), two biographies of Helen Duncan, the spiritual medium who in 1951 became the last person in England to be tried under the Witchcraft Act, M. T. Shelhamer’s Life and Labor in the Spirit World (1885) in which ‘members of the Spirit-Band’ of the author provide a detailed description of the of life in the “Summer-land;” and Penny Dutton Raffa’s surely unfortunately-titled Psycho to Psychic (1982) in which the author tells how a blow to the head, and her efforts to recover from it, led to her immersion in the world of parapsychology and psychical research. Not surprisingly many of the works purport to contain messages from those who have passed over, the number and variety of whom is quite astounding. Thus Francis H. Smith’s My Experience, or Foot-Prints of a Presbyterian to Spiritualism (1860) claims to contain messages from Edgar Allen Poe (who communicates in verse form); Sir Humphry Davy, Dr. Franklin, Sir Walter Scott, and others, William H. Burr’s Photographic Copies of Written Messages from the Spirit World (1918) contains messages from Henry Ward Beecher, James A. Garfield, Elbert Hubbard, Abraham Lincoln, Ernest W. Huffcut and others; C. P. Christensen’s The Spiritualist: Vol.2, No.11 (1916) contains a message from Queen Victoria; and more recently Jack Perry’s & Robert Neil Porter’s Spirit World Breakthrough (1969) comprises “a compilation of fifty messages from famous persons who have made the transition from this world to the next” with contributors including Cesare Borgia; Cleopatra; Elizabeth Barrett Browning; Franz Schubert, Lee Harvey Oswald; Louis Pasteur; Marilyn Monroe; and many others. Not to be outdone, the great Scottish philosopher and man-of-letters Thomas Carlyle is said to have posthumously authored a complete book: Wm. J. Bryan’s What Spiritualism Really Is, by Thomas Carlyle in the Spirit World (1920).” [via]