Guillermo del Toro Cabinet of Curiosities: My Notebooks, Collections, and Other Obsessions by Guillermo Del Toro and Marc Zicree is due to release on October 29th, 2013. 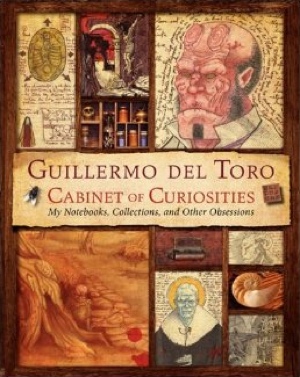 “Over the last two decades, writer-director Guillermo del Toro has mapped out a territory in the popular imagination that is uniquely his own, astonishing audiences with Cronos, Hellboy, Pan’s Labyrinth, and a host of other films and creative endeavors. Now, for the first time, del Toro reveals the inspirations behind his signature artistic motifs, sharing the contents of his personal notebooks, collections, and other obsessions. The result is a startling, intimate glimpse into the life and mind of one of the world’s most creative visionaries. Complete with running commentary, interview text, and annotations that contextualize the ample visual material, this deluxe compendium is every bit as inspired as del Toro is himself.

Contains a foreword by James Cameron, an afterword by Tom Cruise, and contributions from other luminaries, including Neil Gaiman and John Landis, among others.” [via]