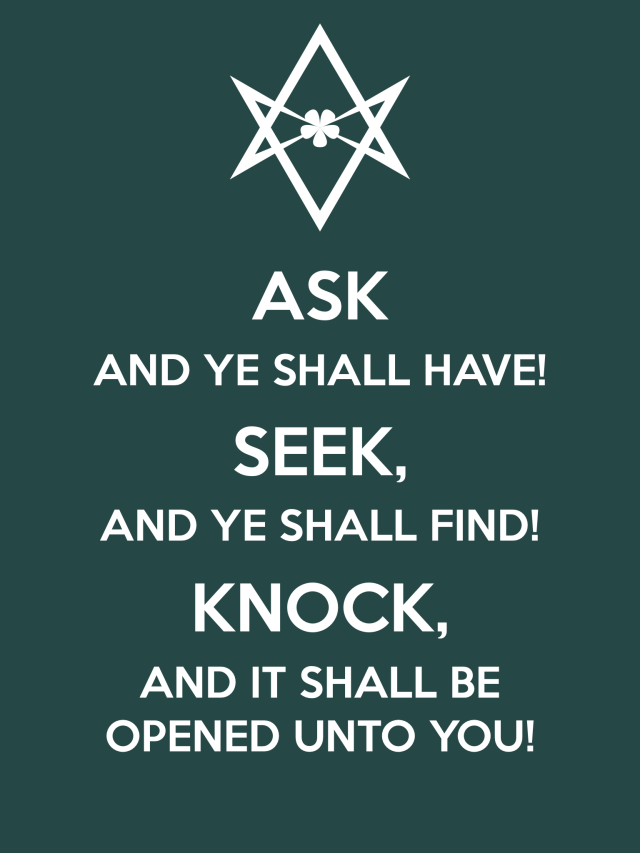 This Unicursal ASK SEEK KNOCK Poster is another piece of helpful propaganda from the Ministry of Information, a take on the original trilogy of British posters from WWII combined with a quote from Matthew 7:7 which appears in the final stanza of the Thelemic and Golden Dawn document Liber Librae.

The upcoming release of Magick, Music and Ritual 9 is planned around astronomical Samhain, when the Sun is at 15° Scorpio, which will be November 7th.

Eternal Fire Crown from Sharon Ehman’s Toxic Vision
The Wild Hunt 2013 Fall Funding Campaign
Oracle — Mystifying Playing Cards, a crowdfunding effort
The Testament of Cyprian the Mage by Jake Stratton-Kent has been announced by Scarlet Imprint
Events at Treadwell’s for November and December, 2013
Guillermo del Toro Cabinet of Curiosities: My Notebooks, Collections, and Other Obsessions by Guillermo Del Toro and Marc Zicree is due to release on October 29th, 2013
Pyramidox vel Heb á Qual by Michael Idehall, who is also a Hermetic Library anthology artist, is a work that will be available for pre-order on Oct 21st, 2013

Visions of Enchantment at Cambridge on Mar 17th-18th, 2014
Thunder Perfect Mind is a video of a Jordan Scott & Ridley Scott film for a 2005 Prada ad, staring Daria Werbowy, music composed by John Altman, and words selected from “Thunder, Perfect Mind”, one of the Gnostic texts found at Nag Hammadi
The Book of the Lost, a teaser trailer