Here’s a summary of activity for the week ending January 11th, 2014. 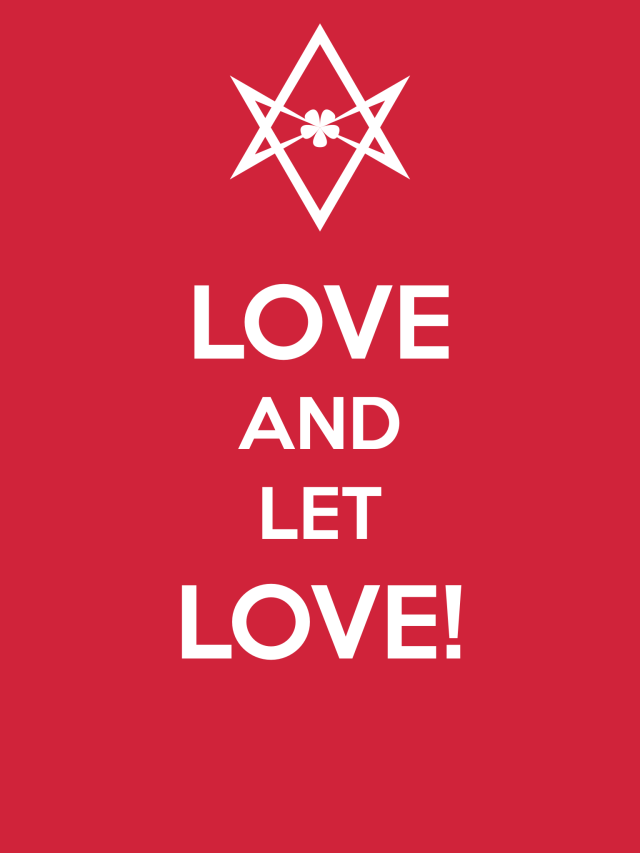 This Unicursal LOVE AND LET LOVE Poster is another piece of helpful propaganda from the Ministry of Information, a take on the original trilogy of British posters from WWII combined with a quote from Aleister Crowley’s The Heart of the Master.

I recently announced Magick, Music and Ritual 10 as the Winter 2014 album from the Anthology Project and posted a call for submissions on Dec 15th, 2013. Regrettably, I have decided to indefinitely postpone that issue. There will be no quarterly releases from the project in 2014. If there’s interest, I may try for a single anthology release in 2014, moving to an annual release schedule, and hope the project is able to continue in that fashion. If there’s not sufficient interest in participating in the creation of an annual anthology this year, then the project will end.

In addition to the Hermetic Library itself, do consider checking out the many ways you can participate in the work of the library, and ways you can become a supporter. Becoming a supporter, with either a one-time or recurring donation, will help the library pay hosting costs necessary to stay online, expand the collection, and develop other projects such as perhaps an actual Reading Room. In addition to feeling good about helping the library, becoming a supporter means you will be included in things such as occasional unannounced Postal Potlatch mailings as well as other occasional fun such as receiving gratis download codes for each new Hermetic Library Album and more!

Dionysos: Exciter to Frenzy by Vikki Bramshaw, from Avalonia UK
The Book of Going Back by Night by Orryelle Defenestrate-Bascule, including commentary by Nema
Worlds by Ian Andersen / Citric Comic
The Golden Dawn System of Initiation with M Osiris Snuffin in Seattle on Jan 30th, 2014

The Magic Bishop, an essay about Hugo Ball by Anne Crossey
My Infernal Pact by Lon Milo DuQuette and friends
Put a Satanic Monument at OK Capitol, a crowdfunding effort
Aleister Crowley’s The Rite of Mars, a rock opera, a crowfunding effort
Welcome to Munchen, Minnesota, something something supernatural fiction set to debut in April 2014
Final Graven Kiss, official SickTanicK music video
Recent post on Reflections From The Black Stone talks about stumbling across all the anthology albums
Charisma & Magic, podcast episode with Craig Berry interview about Aleister Crowley
Artemisia March, music from Eleusyve Production’s Rite of Mars
Invocation of the Androgynous Muse from Chemical Marriage
Aepril Schaile: EEMED 2008, a video of ritual dance performance
Ancients, a video by Nicholas Buer with music by Shudan
Successful appeal to help Aaron Leitch