Morals and Dogma of the Ancient and Accepted Scottish Rite of Freemasonry Prepared for the Supreme Council of the Thirty-third Degree, for the Southern Jurisdiction of the United States by Albert Pike, is part of the collection at the Reading Room. Although the title page of this copy has A∴M∴ 5641 (1881), the copyright page states that this volume was “Manufactured by L. H. Jenkins, Richmond, Va. September 1917.” 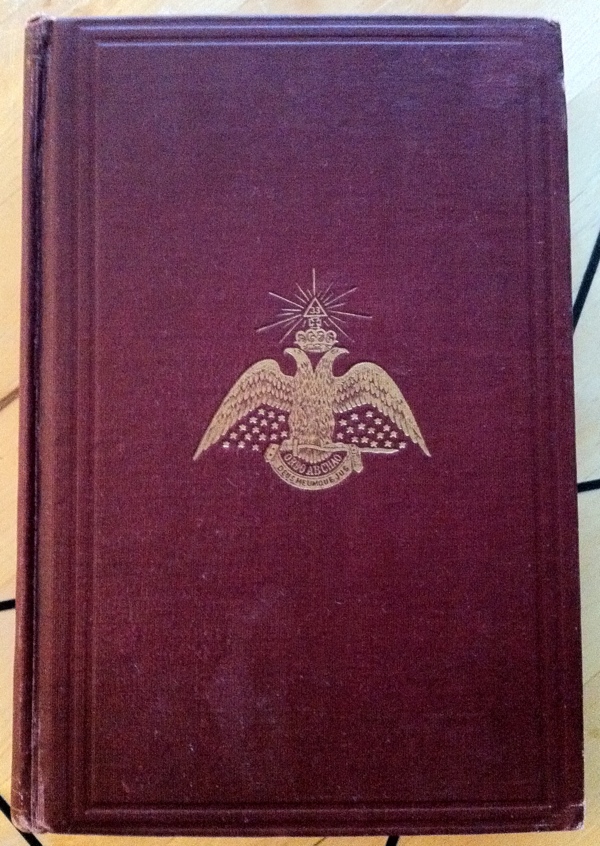 I found this book in an antiques shop in Vancouver, WA around, I think, 1983, about the time when I first moved to the area for high school. I was interested in the material contained, but I recall also being extremely amused by the title. So very obviously amused, in fact, that the shop owner became offended and almost refused to sell it to me until he was finally convinced I was precocious enough to actually care about the contents. I vaguely recall that I had read at least the preface and was able to explain to the shop owner that I understood the intended meaning of the title, as opposed to how amusing it was simply at first glance.

“The following work has been prepared by authority of the Supreme Council of the Thirty-third Degree, for the Southern Jurisdiction of the United States, by the Grand Commander, and is now published by its direction. It contains the Lectures of the Ancient and Accepted Scottish Rite in that jurisdiction, and is specially intended to be read and studied by the Brethren of that obedience, in connection with the Rituals of the Degrees. It is hoped and expected that each will furnish himself with a copy, and make himself familiar with it; for which purpose, as the cost of the work consists entirely in the printing and binding, it will be furnished at a price as moderate as possible. No individual will receive pecuniary profit from it, except the agents for its sale.

It has been copyrighted, to prevent its republication elsewhere, and the copyright, like those of all the other works prepared for the Supreme Council, has been assigned to the Trustees for that Body. Whatever profits may accrue from it will be devoted to purposes of charity.

The Brethren of the Rite in the United States and Canada will be afforded the opportunity to purchase it, nor is it forbidden that other Masons shall; but they will not be solicited to do so.

In preparing this work, the Grand Commander has been about equally Author and Compiler; since he has extracted quite half its contents from the works of the best writers and most philosophic or eloquent thinkers. Perhaps it would have been better and more acceptable, if he had extracted more and written less.

Still, perhaps half of it is his own; and, in incorporating here the thoughts and words of others, he has continually changed and added to the language, often intermingling, in the same sentences, his own words with theirs. It not being intended for the world at large, he has felt at liberty to make, from all accessible sources, a Compendium of the Morals and Dogma of the Rite, to re-mould sentences, change and add to words and phrases, combine them with his own, and use them as if the were his own, to be dealt with at his pleasure and so availed of as to make the whole most valuable for the purposes intended. He claims, therefore, little of the merit of authorship, and has not cared to distinguish his own from that which he has taken from other sources, being quite willing that every portion of the book, in turn, may be regarded as borrowed from some old and better writer.

The teachings of these Readings are not sacramental, so far as they go beyond the realm of Morality into those of other domains of Thought and Truth. The Ancient and Accepted Scottish Rite uses the word ‘Dogma’ in its true sense, of doctrine, or teaching; and is not dogmatic in the odious sense of that term. Every one is entirely free to reject and dissent from whatsoever herein may seem to him untrue or unsound. It is only required of him that he shall weigh what is taught and give it fair hearing and unprejudiced judgement. Of course, the ancient theosophic and philosophic speculations are not embodied as part of the doctrines of the Rite; but because it is of interest and profit to know what the Ancient Intellect thought upon these subjects, and because nothing so conclusively proves the radical difference between our human and the animal nature, as the capacity of the human mind to entertain such speculations in regard to itself and the Deity. But as to these opinions themselves, we may say, in the words of the learned Canonist, Ludivicus Gomez: ‘Opiniones secundùm varietatem temporum senescant et intermoriantur, aliæque diversæ vel prioribus contrariæ renascantur et deinde pubescant.’” — preface