Idolotry Restor’d: Witchcraft and the Imaging of Power by Daniel A Schulke, from Three Hands Press, was scheduled for release in November 2013, but appears to still be in pre-order. The special leather-bound edition is sold out, but deluxe and standard hardcover editions are still available. 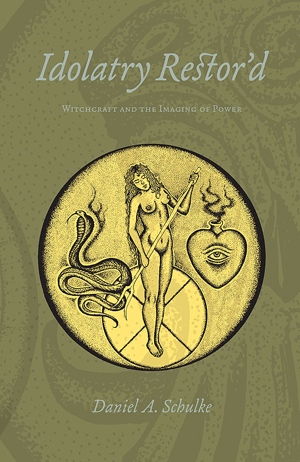 “The translation of magical power to image is a matter well understood in so-called ‘primitive’ sorcery, in which occurs a mutual embodiment of re-presentation and the Represented. The Fetish, for example, apprehends a reciprocal process between Object and Creator that often begins long before chisels and adzes are set to wood, participating in its own reification. Many of these eldritch forms of image-making were concerned with accessing power, and it was only later, in the context of religious devotion, that their forms densified into ‘mere’ idols. With increasing levels of religious control over art, a Moiré pattern arises between the Artist and the forces of the Divine, which may either suppress individual visionary power in favor of canonized icons, or, when correctly accessed, give rise to an ‘heretical creativity’.

Witchcraft, because of its syncretic nature, partakes in multiple infusions of traditional image-making lore, including not only sorcery and religious iconography, but also science, craftsmanship, and the fine arts. However, because much of its images are used privately, and indeed created for a limited set of observers, they participate in a concentrated alembic of exposure wherein all who experience them do so in the context of magical practice and devotion. This intensity of private magical interaction provides a locus which enables the image to transcend its medium—and indeed that fetish known as ‘icon’—and generates living numen.

First published as an essay in the British folklore quarterly The Cauldron in 2009, Idolatry Restor’d drew upon the experiential arenas of magical practice and Image-Artistry which came to inform Schulke’s book Lux Haeresis (Xoanon, 2011). Here substantially expanded with illustrations prepared especially for the work, Idolatry Restor’d is a book of engaging fascinum for both Artists and Beholders alike, and strikes at the heart of magical image-aesthesis.” [via]