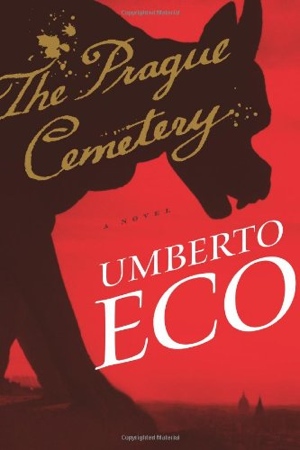 The Prague Cemetery is something like a more anti-heroic Fight Club set in late 19th-century Paris, using a diary framework to provide a thorough excavation of the self-dissociated central character. The Piedmontese Simone Simonini is as vile a creature as one can imagine, guilty of venal crimes that he sees through to their murderous conclusions, and of a great misdeed to bear fruit over succeeding generations. He is a double-crossing pseudo-spy, filled with misogyny, antisemitism, paranoia, and avarice. At one point, contemplating an author he has met, Simonini remarks, “I have been told that the great storytellers always portray themselves in their characters” (275). Such an adage invites application to the author of The Prague Cemetery himself, but why or how would Umberto Eco want to be compared to Simonini?

As a career forger who has been enlisted by the intelligence apparatuses of various powers, most often to fabricate “evidence” damning those they’d like to do away with, Simonini plagiarizes novels for his “historical” documents. Eco plagiarizes history for his novel. (He assures us that Simonini is the only fictional character of substance in the whole thing.) Eco’s motives like Simonini’s are didactic and propagandistic. Simonini wants to warn his readers about the Jews and their plots, Eco wants to warn us about antisemitism and its cultural conditions.

The fabrication of political scapegoats to suffer the outrages of authoritarian violence is not limited to the 20th-century antisemitic movements which are shown being incubated in this novel. Russian secret police have a part to play in The Prague Cemetery, and I would encourage those who read this book today to observe the persecution of gays and lesbians in Russia by means of cultural capital produced in America: the “family values” and anti-“homosexualist” rhetoric crafted by right-wing churches and think tanks. (Scott Lively is one of today’s more obvious Simone Simoninis.)

Bereft of any nobler motivation, Simonini takes his chief enjoyment in life from food. The novel has occasional raptures of gastronomical detail, reminiscent of Huysmanns’ diabolical 1890s novel La-Bas (which also includes—a clef—some of Eco’s historical characters). A surprising but effective feature is an assortment of full-page illustrations from period engravings, at the rate of roughly one per chapter.

The Prague Cemetery does resume a number of themes from Eco’s Foucault’s Pendulum. But in this case, the seemingly more bizarre facts are even more authentic, and the moral upshot is more persuasive and important. Those who enjoy the historical elements of this story and don’t mind adding a bit of whimsy to the incendiary past can continue on without diachronic interruption to Thomas Pynchon’s Against the Day. [via]