Here’s a summary of activity for the week ending February 15th, 2014. 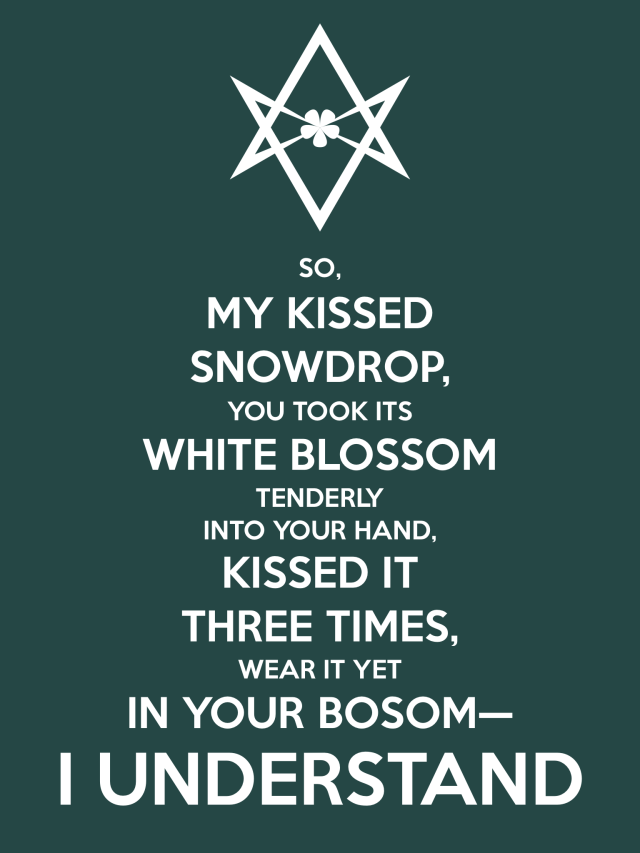 This Unicursal KISSED Poster is another piece of helpful propaganda from the Ministry of Information, a take on the original trilogy of British posters from WWII combined with a quote from Aleister Crowley’s February 14th, 1897 poem A Valentine.

Honor Thy Gods: Popular Religion in Greek Tragedy by Jon D Mikalson
Romancing the Goddess: Three Middle English Romances about Women by Marijane Osborn
Lark in the Morning: The Verses of the Troubadours, a Bilingual Edition by Robert Kehew
How to Kill a Dragon: Aspects of Indo-European Poetics by Calvert Watkins
The Anger of Achilles: Mênis in Greek Epic by Leonard Muellner
Arjuna in the Mahabharata: Where Krishna Is, There Is Victory by Ruth Cecily Katz
Paul: Saint or Rascal? by Walter C Cambra, a monograph, has arrived at the Reading Room courtesy of the author
Mahabharata by William Buck, introduced by B A van Nooten, illustrated by Shirley Triest
Glasshouse by Charles Stross, reviewed by T Polyphilus

A True & Faithful Relation Of What Passed For Many Years Between Dr. John Dee And Some Spirits by Maarten van der Vleuten, with graphic design and cover illustrated by Phil Legard
Dance of Reality: The Psychomagical Autobiography of the Creator of El Topo and The Holy Mountain by Alejandro Jodorowsky
Baphomet doll by Melita Curphy, Miss Monster