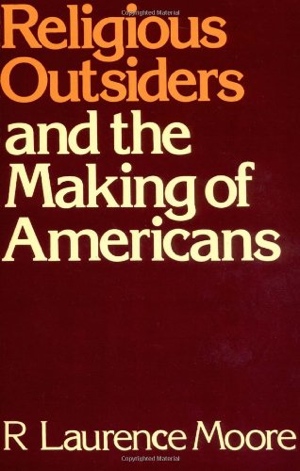 The clumsy-sounding “Americans” of Moore’s title is intended to highlight the issue of like-it-or-not pluralism that pervades the book; there is no unitary America on the plane of religion. He characterizes ecumenism as a Protestant appetite, and emphasizes the recurrent usefulness of religious particularism and dissent. In many respects, he provides a historical and philosophical structure to comprehend the “supply-side” assertions of Stark and Finke’s later Churching of America, while transcending their focus on the statistically predominant Protestant institutions of American religious history. He also places himself in opposition to the expansive insider paradigm advanced in Robert Bellah’s theory of American civil religion, which Moore describes as “inexplicable” in its attractions, absent the ecumenical motive developed by Protestants and imposed by misreading onto Herberg’s Protestant, Catholic, Jew. (pp. ix, 18-19) In fact, Moore points out adroitly enough that “Civil religion…like more ordinary religions, may have split Americans into separate camps as often as it has brought them together.” (p. 202)

While apologizing for an apparent lack of narrative development or thematic unity in his relatively short book, Moore maintains throughout a consistent perspective highlighting the essential nature of the outsider position in American religion, to the point where a reader may suspect that to be genuinely religious in the US requires being an outsider of one sort or another. Reading the book provokes the question: who are “religious outsiders” in America? Moore starts with a clear-cut instance; in their origins and early history at least, Mormons were a tiny minority undoubtedly cast as deviant and progressively alienated from the national establishment. But his next two chapters, on Catholics and Jews respectively, implicitly demarcate all non-Protestant religions as “outsider.” And in his essay on “The Protestant Majority as a Lost Generation—A Look at Fundamentalism,” he depicts the numerical bulk of Protestants adopting or being cast into the position of outsiders for much of the twentieth century. Ultimately, the pluralism described and advocated by Moore is a circumstance binding on all Americans, and an ideal held by few, if any. In such a situation, a conscious embrace of “outsider” status offers both a measure of authenticity and tactical advantage. Religions can preserve their truth claims while excusing a lack of universal acknowledgement (thus Protestant fundamentalists). Even more importantly, they can reify social and cultural niches that provide their adherents with places in a nation that has never been a utopia.

Moore’s introduction is reminiscent of the introduction to Ahlstrom’s Religious History of the American People, providing a wide-angle review of the historiography of American religion, though in Moore’s case with particular and critical reference to the idea of religious diversity. He observes that histories—whether because of the providential theology of the 19th century or the denominational theories of the 20th—have typically gotten their facts wrong because they trained their attention on the “mainline” groups that embraced insider status and promoted tolerance, even while outsider and intolerant groups did as much or more to define the overall picture of American religious life. Moore later also deploys Ahlstrom’s category of harmonialism, without collapsing occultism and the general run of non-Abrahamic religion into it as Ahlstrom had done; the effect is that he situates Christian Science among Judah’s “Metaphysical Movements,” although he uses Ahlstrom’s term. (p. 116)

The book’s essays are divided into two groups, of which the first concerns itself with “ethnicity and American identity” in the context of outsider religions. In one chapter, Moore casts the development of Mormonism as the crafting of a novel ethnicity. In another, he reviews the “Americanizing” controversy within 19th-century Catholicism. He explains “non-Americanizers” as participants in a conscious strategy by which ethnicity could be used to maintain Catholic ties while adapting immigrants to American society, and presents them as antagonists of the premise that Catholicism was inherently anti-American. The chapter on Judaism describes not only the novelty of the American experience for Jews who found themselves promoted from an object of extraordinary prejudice in Europe to an “ordinary minority” in America, but also the extent to which Jews were able to turn around and become a vanguard in the representation of America to itself through both entertainment media and social justice organizing. By emphasizing ethnicity in these religious identities, Moore brings notions of difference from their peripheries to their centers.

In the second large division of the text, Moore treats “religions for average Americans” under the title “the Progressive’s Despair.” His “average Americans” include Christian Scientists, pre-millenialists, Fundamentalists, and African-Americans. In the first three cases, he soundly makes the case for their ordinariness alongside their “outsider” status, refusing to stigmatize them on the latter account. In the final case, he documents the exceptional nature of Black Christianity in both cultivating and undermining the sense of social autonomy among African-Americans.

While I understand that Moore’s thesis requires him to cultivate sympathy for the religious groups about which he writes, I think he tends to cut too much slack for Biblical inerrancy, e.g. when he characterizes it as “the notion…that the Bible means what it says.” (p. 169) The dilemmas regarding popular hermeneutics of scripture didn’t begin with higher criticism or theological modernism. No text is self-interpreting, and the Bible is less transparent than most. In fact, I think it is rather easier to defend the intellectual integrity of denying biological evolution than that of denying reading.

Another terminological quirk is Moore’s repeated invocation of the “Moral Majority,” which must have seemed like something more than a decade-long political coalition in 1986. (Falwell’s attempted resurrection of a grouping under that banner in 2003 made little progress before his 2007 demise.) Still, Moore’s analysis of Fundamentalism’s persistence after Scopes—as contrasted with the illusion of its reconstitution by Billy Graham—is a sound one, and he puts his finger on the political dilemma that confronted both Fundamentalists and their sectarian pre-millenialist cousins at the close of the 20th century. Their relationship to “Caesar” is necessarily different than the one shown in the gospels, but what should it be?

In the postscript, I was struck by the following remark: “If Americans are now more religiously tolerant than they were in the nineteenth century, it is not because they are collectively more high-minded but because they care less about religion.” (p. 205)

My disagreement with the final clause of the apodosis preoccupied me for minutes, until I realized that I rejected the protasis. And it seems that Moore may as well, if we attend to his final suspension of judgment on whether “consensus as a myth” will continue to be supportable in the future of American religions. (p. 210) I strongly concur that the “invented oppositions” (p. 46) in which our pluralism is rooted are what nourish its religious dynamism. [via]