Tara Morgana by Paul Holman, with photography by Paul Lambert, introduced by Andrew Duncan and Peter Grey, from Scarlet Imprint, in standard and fine hardcover editions, is due in April and available to pre-order now. 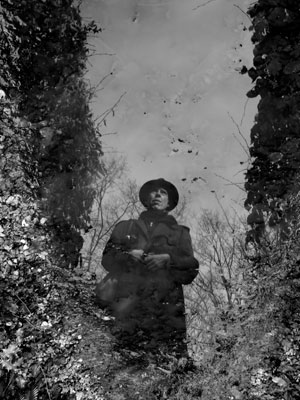 “Tara Morgana is a work of pure magical writing. The title comes from the fusion of the Tibetan devi with Morgan Le Fay who is pursued as a mirage throughout this haunting text.

Part magical diary, part dreamscape, part Situationist dérive through the landscape, Tara Morgana is an enigmatic record of ritual practice from the poet, whose work has been described as: indefinable — laconic, occultist, and attached to the line of revolutionary and subversive yearnings. This is not a book about magic, rather, it is a magical book. Contemplation of the work reveals a wealth of hidden treasures, or as Holman says, each dreamed text is a terma in the mind.

Paul Holman is a lucid poet whose writing, with its concise yet elusive energy, takes us down into the tunnels, ghosts broken urban spaces where decay is overwritten with the ingress of the wild. He encounters denizens of the underworld, the magical subculture and down and outs. It is a work of echoes and memories whose reflections coalesce in dreams that can be recovered and manifest in the present. In his Afterword, Holman spells out aspects of the artistic and magical method he employs.

The book is splintered by a sequence of photographic images: glimpsed spirit portraits, apparitions captured in the play and decay of light, giving it an otherworldly aspect. Tara Morgana is a truly esoteric and numinous text, a beautifully realised work that leads us on two parallel journeys of poetry and image, through the world and work of living magical artists. Both poet and photographer are engaged in games of chance and fate, applied as a discipline to the creative process. It is precisely this rigour that gives both an intensity and a gnomic quality to their respective works.

This is a text to be spoken aloud. Mystical conjunction of word and image are resolved in the alchemy of breath. The act of anagnosis opens the reader to the magical operation through the transformative medium of sound, and returns us to the mystery of beginning(s) and becoming(s). As Holman writes in The Memory of the Drift:

I had no choice
but to undo the spell
which language had cast
upon me when, in
the days of autonomia,
I first met one by whom I
was to be consumed
and then made
afresh: she taught me
that an operation
performed upon the
tongue must transform
the world.

The text is introduced by Andrew Duncan, a respected poet and cultural critic, and by Peter Grey, giving insights into both the literary and magical character of Holman’s work.”