The Drug by Aleister Crowley is the fifth new edition from 100th Monkey Press, available in a hand-bound limited edition. 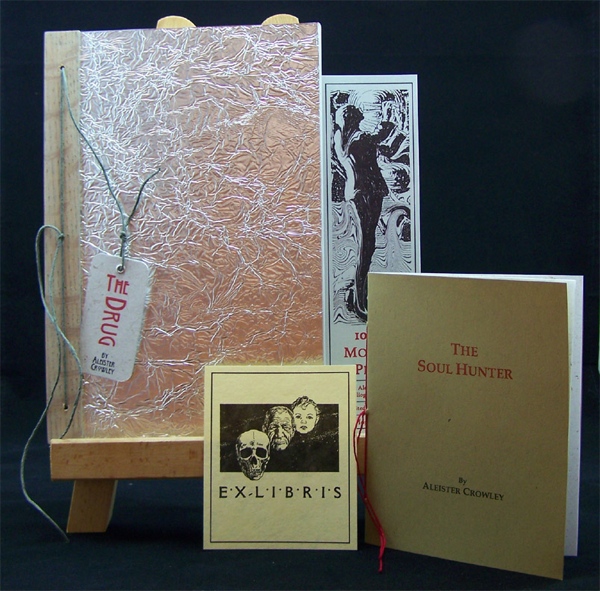 ‘The Drug’ was originally published in Great Britain in the January 1909 issue of The Idler, an illustrated monthly magazine that printed various light pieces and sensational fiction.

This work is one of Aleister Crowley’s earliest published short stories and highlights his power as an author of fiction as well as poetry.

It has been said that this short story is one of the first, if not the first fictionalized account of ingesting a hallucinogenic substance. Crowley certainly experimented with a wide variety of mind-altering substances throughout his life, and it is not too far-fetched to consider the possibility that this story may be based, at least in part, on personal experience.

‘The Drug’ may be based on Crowley’s experiences with Anhalonium Lewinii, a now obsolete name for Lophophora Williamsii, commonly known as the peyote cactus. The active constituent of peyote is mescaline, a well-known alkaloid that can produce hallucinogenic effects when ingested.

References to Anhalonium Lewinii by Crowley are found as early as 1907. Crowley’s diary entry for 12 March 1907 seems to indicate that he was using a commercial preparation of Anhalonium Lewinii. He writes that he has taken 10 drops of the preparation and will take no more since this was the maximum dosage mentioned on the label. Crowley also seemed to have had a relationship of some sort with Parke-Davis and even mentions an October 1915 visit to the company in his confessions:

‘They were kind enough to interest themselves in my researches in Anhalonium Lewinii and made me some special preparations on the lines indicated by my experience which proved greatly superior to previous preparations.’

According to Perdurabo, Dr. Richard Kaczynski’s excellent biography on Crowley, the Abbey of Thelema’s copy of Diary of a Drug Fiend contains a marginal note by Crowley stating that he had conducted numerous experiments on people with Anhalonium Lewinii in 1910 and afterwards. These experiments may have formed the basis for Liber CMXXXIV, The Cactus, described as ‘An elaborate study of the psychological effects produced by Anhalonium Lewinii (Mescal Buttons), compiled from the actual records of some hundreds of experiments.’ Unfortunately The Cactus was never published and is now considered lost to history.

Whether ‘The Drug’ is truly a fictionalized account of the use of peyote is, of course, open to debate, but, the story does stand on its own as a very early piece of psychedelic literature. [via]