Epoch. The Esotericon & Portals of Chaos by Peter J Carroll and Matt Kaybryn, a new hardcover book and 55-card deck, published by Arcanorium College for Spring Equinox 2014, is available now, signed by author and illustrator, from Weiser Antiquarian. 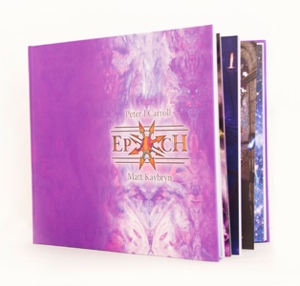 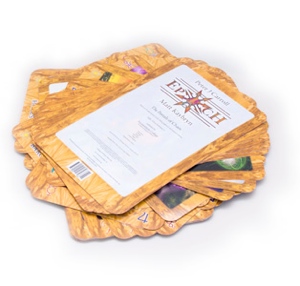 This illustrated and “illuminated” hardback opens with a detailed historical resume of magical and esoteric thought before presenting the reader with three complete grimoires. From the publisher: “this superbly produced book contains extensive text by Peter J Carroll and over 50 large full colour illustrations from Matt Kaybryn, which are represented in the accompanying deck. Carroll’s text begins with a historical resumé of magical and esoteric thought before moving on to present the reader with three complete grimoires. The first grimoire of Elemental magic deals with modern practical magical techniques and the classical and modern interpretations of the traditional elemental symbolism. The second grimoire of Planetary magic deals with the Pagan and Neo-Pagan-magical archetypes or ‘god-forms’, their contemporary roles in the human condition, and how the magician can access them for their inspiration and to borrow their abilities. The third grimoire of Stellar magic deals with the ‘Elder Gods’, those foci of awesome and dangerous extraterrestrial knowledge and power that await us in the vast deep reaches of the cosmos. This grimoire constitutes the latest upgrade to the ever evolving Necronomicon. Complementing and supporting the grimoires, further chapters deal with the history of symbolism, the creation and/ or the evolution of gods and goddesses, and the physics of parapsychology and extraterrestrial communication. All in all this book contains enough to keep any wizard, magician, esotericist or natural philosopher entranced and busy for quite quite some time to come.” Accompanied by oversized deck of 55 cards, called a “Cartomagical tool for the 21st century, the Deck presents 54 Altar Icons spanning the three Spheres of Elements, Bi-Planets and Stellar god-forms.” [via]