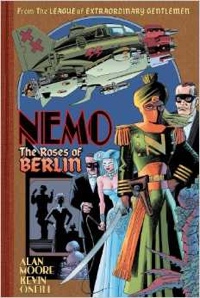 The Nemo spinoff of Alan Moore’s League of Extraordinary Gentlemen comic continues to be more engaging than the vertebral books in the Century arc. The eponymous Roses of Berlin are two female foes for the more mature Nautilus captain Janni, and Moore makes 1930s Berlin into a riff on Lang’s Metropolis.

Some readers may be put off by the many pages of untranslated German dialogue. My German, though rusty, enabled me to catch a few jokes that would have been lost on a strictly monolingual audience.

Kevin O’Neill’s art is in good form, and delivers a sense of dystopian epic in some sprawling panels. [via]