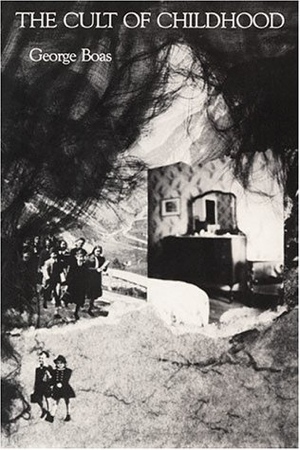 I knew Boas as the translator of my copy of The Hierogyphics of Horapollo, an important Renaissance text on iconography. This short monograph is a straightforward mid-20th-century “history of ideas” treatment issued under the auspices of the Warburg Institute. It was my hope that it would be a piece of secular scholarship with as much relevance to Thelemic esoteric doctrines as that of Jane Chance Nitzsche’s The Genius Figure in Antiquity and the Middle Ages. I was, however, rather disappointed.

The main thesis of the book is that there was no idealization of childhood per se (this qualification exempts exceptional children, including especially the Child Jesus) until later modernity. Certainly, as chronology goes, Boas is in accord with the Thelemic oracles. It is difficult to prove a negative, of course, but in an intriguing footnote he allows for two antique instances: Iamblichus and a passage in Corpus Hermeticum X (15 n.).

Boas lumps the “Cult of Childhood” into a family with other forms of “primitivism,” focused on savages, women, and the unconscious. He is, well, not a fan. Throughout the volume, he begins to lay into one or another representative of this primitivist sort of thinking, but then backs off, protesting that he shouldn’t exceed his self-assigned mandate to trace out the history of an idea. His main fields of examination are philosophy and belles lettres, and he takes as the champion of the fully-developed Cult in the 20th century the neo-Freudian Norman O. Brown.

The most redeeming feature of the book for me (although practically irrelevant to its own agenda) was a long gloss on the encomium of the ass in Agrippa’s De incertitudine et vanitate omnium scientiarum et artium (23-26). [via]