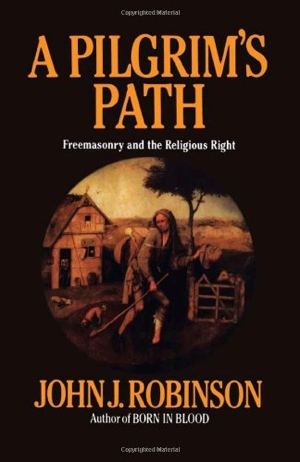 Robinson uses simple, clear language to provide a view of both American Masonry and contemporary anti-Masonry. A Pilgrim’s Progress grew out of his experiences with the popular responses to his earlier book on Masonic origins, Born in Blood. Robinson is convinced that religious freedom and toleration are at the core of the Masonic ethic, and that today’s anti-Masons—whatever their superficial arguments—are principally motivated by hostility to religious freedom. In addition, he provides a discussion of ways that Masonry might adapt to confront the challenges posed by its foes.

A Pilgrim’s Progress is not a profound work of scholarship, though. For example, Robinson provides a summary and criticism of the Jack Chick comic tract Curse of the Baphomet, in which he provides the description of the “winged creature with the body of a man, the breasts of a woman, and the head of a horned goat.” If you just read Robinson, you would tend to think that this “devil-figure” was the sole invention of Jack Chick, rather than a traditional occult image first published in the works of Eliphas Levi.

Besides the Chick tract, Robinson summarizes and rebuts the work of the Southern Baptist anti-Masonic organizer James Holly and televangelical media magnate Pat Robertson. He includes a discussion of the Leo Taxil hoax, and points out the forged “Albert Pike” Luciferian quote as a staple of more than a century of anti-Masonic discourse. Inevitably, he cites the Bible against the “Christian” foes of Masonry. In assessing the motives of anti-Masons, Robinson emphasizes religious power and controlling followers through fear. As a primer on the role of Masonry in American society, and a counter to common paranoid tropes on the topic, the book holds up pretty well. [via]