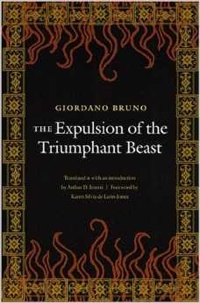 Jordanus Brunus Nolensis (i.e. Giordano Bruno) proclaimed himself d’ogni legge nimico e d’ongi fede (“enemy to every law and every faith”). Excommunicated by Catholics, Calvinists, and Lutherans, he was finally burned at the stake by the Roman Inquisition. Bruno was an original and profound theorist of the magical link and a surpassing mnemotechnician, who aspired to revive the solar worship of the ancients. This longish work of his is an Hermetic fable of universal reformation, cast in dramatic form. It details a celestial convention in which the gods of heaven (as exhibited in the constellations) are assigned new duties. It includes allegorical criticisms of the state of European society in Bruno’s day, but it may be of special interest to those who consider that we are now resident in a New Aeon where the old gods have given way to new powers. [via]