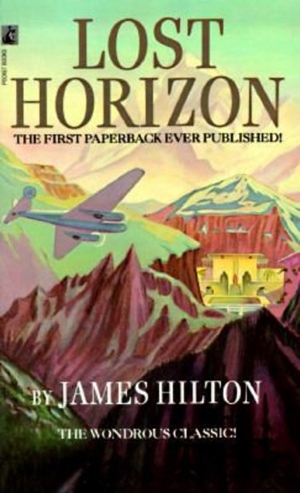 This novel is the original account of Shangri-La, a key instance of the trope of the secluded Asian mountain paradise. It sets up decently, with a great deal of mystery about the lamasery of Shangri-La itself, and a very gradual process of revelation to a well-drawn set of central characters.

Surprisingly, the story turns out not to be particularly Orientalist. There is nothing putatively “Eastern” about the mysticism and advanced powers of the lamas. In fact, transplanted Westerners seem to be the rule rather than the exception among them. Hilton does succeed in describing a rather appetizing micro-society of adepts in symbiosis with a secluded culture. The utopian philosophy of Shangri-La even lauds the virtue of Slack. (Praise “Bob”!)

I was enjoying it all tremendously until the final chapter and epilogue, in which it seemed that everything that had been so carefully set out was hastily cast aside. Plot details were provided that seemed intended to vouchsafe the genuineness of the Shangri-La adepts; but at the same time, it seemed wrong that people having such powers and purposes could err so dramatically. Perhaps the central character Conway was subjected by the lamas to a more refined mindfuck than a simple misrepresentation of their general program. But I feel like I’m stretching in an effort to save a story that its author failed to fulfill, and my lingering appraisal is one of faint disappointment. [via]