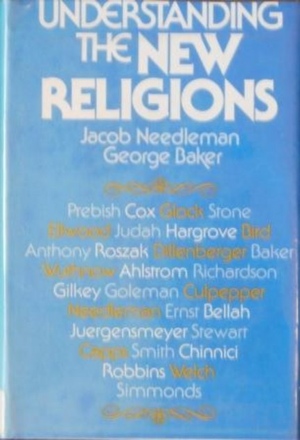 This volume is largely the product of a conference on new religions undertaken by the Graduate Theological Union of Berkeley in 1977 to inaugurate its program for the “Study of New Religious Movements in America.” Needleman and Baker represent the program as its directors, while the twenty-odd further contributors are scholars of religion, theology, sociology, psychology, philosophy, and history from institutions across the country. This venue appears to have been a principal epicenter of the first effort to advance the “NRM” label (abbreviated thus nowhere in the volume) in contradistinction to the pejorative “cult”—an effort which sometimes smacks of euphemism when writers focus on controversy regarding the allegedly threatening or ethically problematic aspects of “new religions.” (In particular, J. Stillson Judah’s paper on deprogramming is evidently a reaction to the counter-cult movement of the 1970s.) Needleman, in contrast to the title of both the book and the GTU program, refers to the “new religions movement,” as though there were a basic unity among the phenomena treated, other than the level and quality of provocation that they afford to both secularism and “traditional” or establishment religion.

Many of the papers collected in Understanding the New Religions more directly approach this question of an underlying unity, with answers that are by no means conclusive. Barbara Hargrove discusses the extent to which various new religions present diametrically opposed features, which she groups under the labels of “integrative” and “transformative.” (A less even-handed treatment might call them reactionary and progressive, respectively.) She suggests that the simultaneous development of both types during the 1970s indicates a basic bankruptcy in preexisting religious forms as an outcome of secularization and individualization of religion. So in her study, the locus of the single “problem” turns out to reside in the religious establishment rather than among the new religions which have arisen as responses. Similarly, Theodore Roszak on “Ethics, Ecstasy, and the Study of New Religions” sees the new religions as a response to the spiritual void and despair in modern culture, but he indicates that they share a common remedy in the reintroduction of ecstatic awareness into religious life. (This particular paper seems to be a “think piece,” with no source citations and a huge, barely grounded metanarrative. For all that I like his rhetorical style and sympathize with his soaring final pages, I question whether Roszak’s generalizations about new religions are empirically sound.)

One approach to the unity or disunity of new religions is the historical, which is offered by Robert S. Ellwood, among others. Ellwood advocates the diachronic emphasis in examining new religions, and like most who look at these religions in that manner, he concludes that “new” is something of a misnomer, preferring “emergent” in his case. And yet while he can point to the diachronic continuity of individual religions, he is skeptical of the sort of synchronic theories evident in Hargrove and Roszak, which are traceable to the original framings by Weber and Troeltsch. In part, this disagreement of theory seems to stem from diverging preferences for historical or sociological methods. Sydney Ahlstrom’s contribution, written after his Religious History of the American People, casts “newness” in terms of centuries, by describing the “extraordinary pluralism” and “unremitting fecundity” in American religion as a “venerable tradition” in its own right. (19) In a similar vein, Sheldon Ernst evokes a gradually expanding “range of the new” over the course of American religious history, with a pluralist dynamic as the cause of the overall trend. (44) Joseph P. Chinnici, on the other hand, points to the persistence of the Protestant declination narrative in Ahlstrom’s account, and contrasts it with a perspective which rejects not only the original coherence of “Protestant America” but the presumed unity of medieval Catholicism. Harvey Cox’s paper on “Deep Structures in the Study of New Religions” straddles the diachronic and synchronic by pointing to a set of recurrent myths used to characterize deviant and minority religions throughout Western history.

Place, rather than time, forms another analytic category for authors trying to characterize new religions. Ahlstrom notes, and John Dillenberger emphasizes, the extent to which California provides a raised dais for new religious phenomena. Such a focus is consistent with the extent to which imported Asian religions are seen as an essential dimension of the new religions in America. Charles Prebish offers a set of “Reflections on the Transmission of Buddhism to America,” in which he makes a plea for distinguishing between faddish neo-Buddhism and “honest Buddhism” (172) in the US, acknowledging in both cases their relationship to the American context, but suggesting that the element of exoticism highlighted in the former reduces its value and viability. In Mark Juergensmeyer’s case study of Radhasoami, on the other hand, he points to the “trans-national” character of the religion as one of its key strengths, and he notes the effective disinterest of adherents in exotic culture as such. On a related note, Robert Wuthnow advances the condition of international polity or “world order” as a determinant of the activity of religious movements, a theoretical principle which is then applied by Dick Anthony and Thomas L. Robbins in their paper on the Unification Church and its regard for ethical “ambiguity” in the diplomatic and strategic situation of the United States.

Unlike some of the other themes and problems treated in this book, race and gender are regrettably sequestered off into a token paper for each. Neither paper is especially helpful on its own terms, although either (and the editorial arrangement of both) could be used as an indicator of the state of the field in the late 1970s. Archie Smith, Jr. is perfectly correct in his criticisms that a) the “new religions” investigated tend to neglect developments in African-American religion, and b) a proper understanding of new religions in the US should account for differences in appeal across racial boundaries, but he takes no concrete steps in either of these directions. Emily Culpepper’s paper on “The Spiritual Movement of Radical Feminist Consciousness” is laden with quaint “gynergy” and admits to being a piece of evangelism, rather than scholarship. (“My concern is to spread the word among women….” p. 221) Its presentation of feminist witchcraft is, alas, an instance of misleading propaganda in those points where it is offered as accurate history.

Needleman’s preface and Baker’s final paper frame the volume in terms of puzzles regarding teaching about new religions. Robert Bellah suggests that the discipline of religious studies, by providing a pluralistic context for the teaching of religion—and not merely teaching about religion—has begun to constitute itself as a new religion, seriously engaging religious symbol systems (what Needleman calls “contemplative ideas” on p. xiv) while operating outside the received institutions of religious authority. These pedagogical concerns also shade into discussions regarding theories and methods of research. Walter Capps, while providing support for Bellah’s claim regarding the properly religious aspect of the discipline, points out that different theoretical premises are required in order to study new religions as dynamic social phenomena, distinct from the Enlightenment concept of religions as codified traditions. Richardson, Stewart and Simmonds’ paper on “Researching a Fundamentalist Commune” proposes that ethnographers in the field can benefit from a greater level of personal candor and reciprocity in interacting with their subjects. Langdon Gilkey’s paper offers the most overtly theological treatment in the volume, actually deploying the word “pagan” (albeit in scare quotes, on p. 137) to characterize the destabilizing influences that engender new religious movements, and suggesting that they are part of a dialectic which will historically clarify the will of the Christian God. [via]