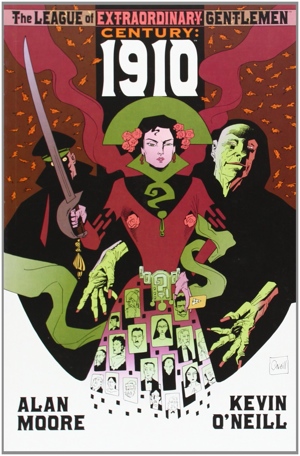 Moore just can’t seem to shake Jack the Ripper, who comes back from hell somewhat anachronistically in this League story, the first of a new series evidently intended to span the 20th century. Best appreciation of this number will be afforded by prior familiarity with the earlier volumes of Extraordinary Gentlemen, as well as some of the sources for Moore’s baroque metafictional weave. In particular, Aleister Crowley’s novel Moonchild provides critical background.

I found the singing narration from incidental characters—with an interminable Bertolt Brecht riff—a little tiresome, but O’Neill’s art is in top form, and the whole piece should be enjoyable to anyone who has liked the earlier comics. (The dismal movie should not be considered an element of the ouvre.) As usual with the League, some of the tastiest material is in the non-comic-book appendix stories. Evidently, Moore can’t keep himself from writing more tales than any artist can be expected to keep up with! [via]