The Problem of Disenchantment

The Problem of Disenchantment: Scientific Naturalism and Esoteric Discourse, 1900-1939 by Egil Asprem, part of the Numen book series, from Brill, is due Aug 2014, and may be of interest. 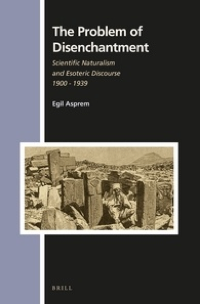 “The Problem of Disenchantment offers a comprehensive and interdisciplinary approach to the intellectual history of science, religion, and ‘the occult’ in the early 20th century. By developing a new approach to Max Weber’s famous idea of a ‘disenchantment of the world’, and drawing on an impressively diverse set of sources, Egil Asprem opens up a broad field of inquiry that connects the histories of science, religion, philosophy, and Western esotericism.

Parapsychology, occultism, and the modern natural sciences are usually viewed as distinct cultural phenomena with highly variable intellectual credentials. In spite of this view, Asprem demonstrates that all three have met with similar intellectual problems related to the intelligibility of nature, the relation of facts to values, and the dynamic of immanence and transcendence, and solved them in comparable terms.”