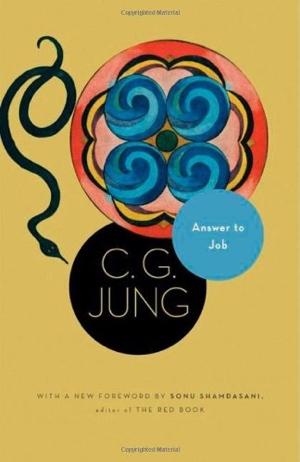 Just as Freud wrote Moses and Monotheism at the end of his career, in which he analyzed the Hebrew religious tradition; Jung wrote Answer to Job late in life as an attempt to integrate the Christian God! It is sometimes hilariously chatty, as when he remarks that “the family life of our first parents was not all beer and skittles.” (p. 31) The central thesis is that the motive for the Christian Incarnation was to redeem God, whose moral inferiority had been disclosed by the events of Job. Jung’s text culminates in a discussion of the Apocalypse.

Although Jung at first claims to be limiting his treatment to the psycho-symbolic dimensions of the Apocalyptic narrative, without discussing their parallels in historical events, he eventually succumbs to the latter temptation. Specifically, he points out the Roman Catholic church’s doctrinal acceptance of the Assumption of the Virgin as a socio-historical realization of the Patmos vision of the Woman Clothed with the Sun.

In my reading, it occurred to me that the Catholic church can function like a great mythic barometer of Western society, because of its vast population, tightly integrated through an organismic hierarchy. And I wondered what “archetypal” conditions might be augured by that church’s current focus of attention: priestly child abuse. The paternal figure of the priest, denoted as benevolent and an agent of divine forgiveness, is now shown to have a terrible hidden aspect more fearsome than that of the God of Job. While that God was merely unjust in authorizing the torment of a righteous man, the God of the abusive priest is cruel in having his ministers victimize the innocent.

Of course, this cruelty is not entirely without biblical precedent. The plague on the firstborn of Egypt was, at least, visited on the offspring of tyrannous, non-Yahweh-respecting, unregenerate pagans who were thus understood as estranged from God. But the molestation of Roman Catholic children who have been brought to church for blessing and instruction is more reminiscent of Herod’s massacre of the innocents, which usually portends an array of dark and worldly forces opposing God’s attempt at sacrificial incarnation. In this case, though, it is God who sends the sacerdotal predators, like He sends the locusts from the bottomless pit in Revelation IX:

“For their power is in their mouth, and in their tails: for their tails [were] like unto serpents, and had heads, and with them they do hurt.” (v. 19) [via]