Hermetic Library fellow T Polyphilus reviews Lucid Dreaming: A Concise Guide to Awakening in Your Dreams and in Your Life by Stephen LaBerge. 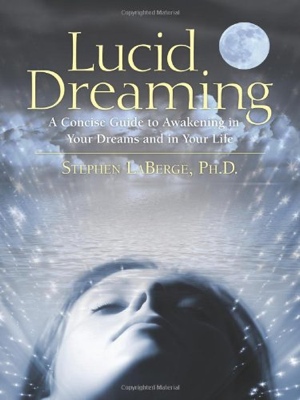 LaBerge’s highly readable treatment of this interesting topic rightly gives it much greater significance than it is generally accorded. My 1986 mass paperback copy promises on the back cover a “systematic, step-by-step program” to cultivate lucid dreaming, but that’s not a fair characterization of the contents. While LaBerge does insist that lucid dreaming is trainable, and he details a couple of the most useful procedures for that purpose, the book’s scope is really much broader. The author provides a full summary of the state of research on the topic up to and including his own. At least one full chapter of the book is devoted to explanations of the function and meaning of ordinary dreams, and his conclusions on these lines are both flexible and well-reasoned. The information offered is founded in sleep lab research of the late 20th century, but the presentation draws on and discusses traditional lore such as Tibetan dream yoga and Sufi teaching stories.

I did find it surprising that a researcher addressing non-ordinary states of consciousness would take the sort of pre-Ericksonian view of “hypnotizability” that LaBerge does, when insisting that hypnosis will facilitate lucidity training for only a small minority of subjects. (172) But this quibble paled beside the quantity of good sense and healthy encouragement to be found in the volume. Another surprise was the final pages’ appeal for funding and participants in LaBerge’s “Lucidity Project,” that gave the book a faint aftertaste of old-fashioned occultist organizing and self-promotion.

An initiated sister once remarked to me her unelaborated opinion that there was no difference between lucid dreaming and the occultist practice of exploration on the astral plane. At the time, I responded with blank disagreement, it seeming obvious to me that one should not a priori subsume one phenomenon in the other without having reasonably robust experience of both. In Lucid Dreaming, LaBerge makes a more extensive and philosophical argument for including “astral projection” as a subset of dream phenomena, but he understands the original scope of the term somewhat differently than I do. Although he is clearly acquainted with the history of occultist usage, at one point summarizing the perspective of Blavatskian Theosophy, his notion is evidently informed by the parapsychological school, with an emphasis on the OBE (Out of Body Experience) as the defining feature of the category. As a lab-trained skeptic, LaBerge rightly takes a dim view of the naive OBE theory, and consequently is able to present astral projection as a “misinterpreted lucid dream.” In deflation of the OBE, he aptly points out, “it would seem reasonable to suppose that we never ‘leave our bodies’ because we are never in them.” (244)

But LaBerge offers another distinction within his (very wide!) category of lucid dreaming, that I would use to distinguish it from the astral voyage. When discussing means of achieving the paradoxical state of lucid dreaming, he identifies two essential methods: waking while dreaming and dreaming while waking. The former method, evidently preferred by him and assumed as the standard in much of the other literature on lucid dreams, is to my mind fully deserving of the “lucid dream” label. The latter method, on the other hand, despite the similarity of its results, should be distinguished as a method, and can be conveniently tagged with such traditional language as “scrying in the spirit-vision,” “astral journeying,” or “clairvoyant travel.” Occultists too have their own term for the lucid dream proper: the Sleep of Shi-lo-am, referenced by Randolph, Blavatsky, Crowley, and others. In fact, Crowley called that state somnus lucidus, and it would be interesting to know whether there was any influence common to or crossing between him and his contemporary Frederik van Eeden, who introduced the term “lucid dream” to psychological discourse.

In fact, the method of astral projection, or in LaBerge’s parlance dreaming while waking, is of peculiar value to occultists, because it
a) facilitates programming of the visionary episode through ceremonial measures, and
b) may allow for visionary phenomena (“auras” etc.) to be superimposed on external perceptions.

Since having studied more widely (with LaBerge’s book as a positive contribution), and having gained more of my own experience, I would now agree that while there is value in distinguishing the methods of astral travel and lucid dream, their highest results are likely to overlap to the point of indistinction. It is not on no account that the greatest occultist of the age, in his most recondite book of esoteric theory and technique, placed his discussion of “Astral Journeys and Visions so-called” sandwiched between multiple passages on dreams. And his verdict on them could apply equally to the lucid dream:

“Whereas the Direction of such Journeys is consciously willed, and determined by Reason, and also unconsciously willed, by the True Self, since without It no Invocation were possible, we have here a Cooperation or Alliance between the Inner and the Outer Self, and thus an Accomplishment, at least partial, of the Great Work.” (Liber Aleph 15, de via per empyraeum)

LaBerge observes that one of the greatest possibilities to arise through lucid dreaming is “surrendering control from who you think you are to who you truly are.” (269) — And lo! thou art past though the Abyss. [via]