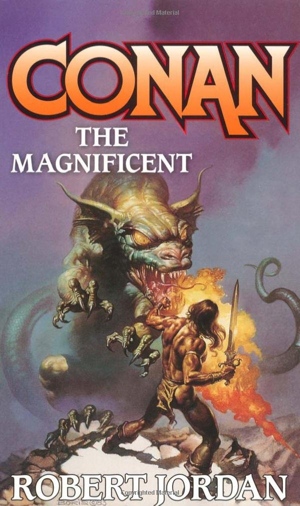 Well, Robert Jordan neither violated the Conan canon, nor came up with anything especially new and interesting in this novel. The chief villain is a religious leader and sorceror whose level of depraved sexual sublimation is only slightly more explicit than what Conan creator Robert E. Howard would have written. He commands untold hordes of what amount to thinly-disguised Jihadists. (Note that this book was composed during the Gulf War, which perversely mobilized American anti-muslim sentiment against the secular Baathist regime of Saddam Hussein.) Conan is “magnificent” for being able to carry on simultaneous affairs with a noblewoman and a thief, for being absolutely flawless in contests of arms, and for slaying the great monster—yeah, it’s basically a dragon—and thus usurping the evident destiny of one of the supporting characters.

As I was reflecting on what, if anything, might distinguish this book from dozens of other latter-day Conan stories written over the three decades or so, I noticed that the pacing was a little quirky. Jordan’s most conspicuous work is an enormous multi-mega-volume fantasy series called “The Wheel of Time,” so perhaps he has never really developed a rhythm for a short stand-alone novel–even one that could draw on thousands of pages of previous character and setting development. And then it occurred to me that there really is no conventional, formulaic pacing or structure for a Conan novel, at least not as established by REH, since the overwhelming preponderance of Howard’s Conan writing took the form of short stories. In this respect, the tendency of later authors to write Conan novels is in marked contrast with the more conservative inclination of most Lovecraftian pastiche-artists to stick with the original short form.

Anyhow, this book. It doesn’t present Conan as a character in any way that’s likely to be compelling to someone who hasn’t already got some imaginative investment in him from some other source. It’s got gratuitous female nudity and inconvenience, and reasonably amusing rivalries and one-upmanship among the characters. There’s no shortage of violence to adrenalize the melodrama. Being okay with all of that, I was still disappointed by the way that the final chapter resolved plot elements at a rather breakneck pace, almost making it seem as though the climax and denouement were added out of a sense of grudging obligation. [via]