Hermetic Library fellow T Polyphilus reviews The Cloud of Unknowing and The Book of Privy Counseling by Anonymous, edited and translated by William Johnston, foreword by Houston Smith. 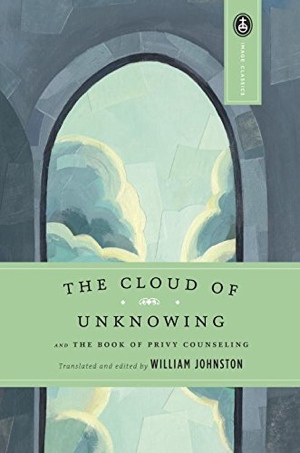 The Cloud of Unknowing is a classic of English mystical literature from the 14th century, composed in the apophatic tradition. In his introduction, the editor William Johnston goes on at some length about the suitability of the advice from the anonymous Cloud author for modern would-be mystics with interests in Zen and other contemplative paths, and Johnston tries to water down and modernize the Christology of the Cloud by characterizing it as a “cosmic Christ” per Teilhard de Chardin. But that reading seems foreign to the text as I grasp it. The Cloud is plainly and professedly in the Christian tradition of pseudo-Dionysius, asserting the excellence of a contemplation that surpasses the distinctions of reason and imagination, yet firmly anchored in the presuppositions of conventional Christian theology.

Chapters 34 & 35 were the high-point of the Cloud for me. The first emphasizes that love under will is the disposition of the accomplished mystic on this path. The second helpfully discusses the need for reading, thinking, and praying, to train the contemplative. In Chapters 37-39, the Cloud is concerned with a particular method of “short” prayer. Johnston’s introduction makes it sound as if this method might be something like mantrayoga, but in fact it turns out to have more in common with the ceremonial magic technique of “vibrating god-names,” and the Cloud actually recommends a prayer consisting of the single word “God” without repetition. Chapter 55 has some curious demonological remarks. The psychological model of the Cloud is set forth in Chapters 62-66, and it is interesting to note that it begins with the Augustinian trinity of memory, reason, and will, except that in the Cloud memory has become “mind.”

Two biblical tropes in the Cloud deserve special mention. The first is the perennial Mary & Martha characterization of the contemplative life and active life respectively. This rhetorical figure was so common among the medieval religious that the Cloud author takes its significance for granted, and uses it in ways that might at first confuse a naive reader. The other noteworthy trope is the Ark of the Covenant as a figure of contemplation, which leads to a discussion of the roles represented by Moses, Bezaleel, and Aaron. This analogy is carefully explained, and struck me as quite evocative.

This edition of the Cloud includes another text by the same author: The Book of Privy Counseling. Its title alludes to the fact that the addressee of the book is evidently a religious subordinate of the writer. Unlike the Cloud, in which the opening and closing passages clearly anticipate a wider audience for the writing, Privy Counseling, while allowing for that possibility, insists that its purpose is to inform one reader who considers the author his “spiritual father.”

There is not much content of Privy Counseling that contradicts or surpasses the Cloud. A good deal of the text consists of an unusual exegesis of the third chapter of the biblical Proverbs. In this particular, the author’s thesis hinges on an unusual “spiritual” reading of Proverbs 3:9, where the “substance” is glossed as “your very self in simple wholeness,” and “first fruits” as “your existence.” This creative exegesis does a certain amount of violence to the evident intentions of the original text. Instruction to the reader to use material resources wisely and piously becomes exhortation to non-material contemplation. And then (in verses 14 & 15) the value placed upon sound judgment becomes a prioritization of the apophatic way beyond reason and imagination. Johnston anticipates that learned modern readers may be “perturbed” by this “contemplative approach to Scripture,” but justifies it with a remark that they reflected “a growth in the understanding” between the writer and the reader, both informed by the same spirit. I think the Cloud author himself knew better, when writing in Privy Counsel that “the light of Scripture, reliable counsel, and the dictates of common sense” should be used to evaluate ideas and courses of action. [via]