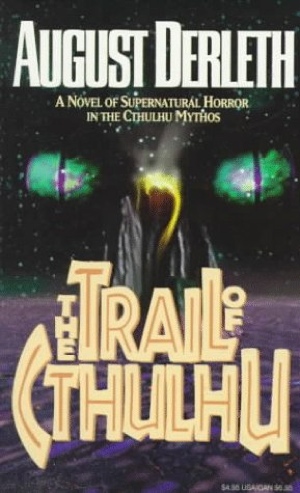 Not properly a novel, The Trail of Cthulhu is more of a “story cycle”: a set of five novellas, with linking narratives, in chronological sequence. Each was originally published separately. There are five protagonists, one for each story, but some feature in each other’s tales. The humans in this book are much more active in their antagonism toward the Great Old Ones (Cthulhu and his cousins) than Lovecraft’s own precedent-setting fictions would have allowed. As the title implies, Derleth’s heroes take the initiative to track down these beings in an effort to rescue humanity from their inevitable reconquest of Earth. The stories are almost entirely plot-driven, and the characters are tepidly drawn. Derleth has no evident skill at dialogue, and he avoids it as much as he can. Still, it’s all digestible fun for those who have a taste for this flavor of nightmare, from human sacrifice in New England to nukes in the South Pacific. The net effect is like nothing so much as an account of a great campaign in the Call of Cthulhu roleplaying game.

Even for a confessed pastiche with some genuine innovation, the writing is often painfully derivative. The third story begins with this sentence: “It is singularly fortunate that the ability of the human mind to correlate and assimilate facts is limited in relation to the potential knowledge of the universe even as we know it—to say nothing of what lies beyond.” Even for the reader unaware that this prose is a virtual plagiarism of the opening sentence of Lovecraft’s “Call of Cthulhu,” the fact is exposed when Derleth uses that very sentence as an epigram for the fourth story!

An appendix is Derleth’s “Note on the Cthulhu Mythos,” in which he attempts to demystify the lore generated by the Lovecraft Circle regarding eldritch prehuman forces. The “immediately apparent” similarity of the Cthulhu stories to “the Christian mythos,” emphasized both in this short essay and in the text of Derleth’s fiction, is an equivalence of Derleth’s own invention, just like his attribution of certain Great Old Ones to the classical elements of fire, water, air, and earth. Although it may be something of ignotium per ignotius in a quick book review, it strikes me that Derleth is to Lovecraft much as Kenneth Grant is to Aleister Crowley. Both are self-appointed successors eager to remake their mentors in their own image. Just as Grant (himself no mean Lovecraft fan) is determined to reduce AC’s Thelema to an outre form of Indian Tantra, Derleth is intent on making HPL’s Cthulhu into an aquatic Satan on steroids.

While the “Note on the Cthulhu Mythos” carefully points out that Lovecraft never took his own writings as anything other than fantasy, the stories of The Trail of Cthulhu represent HPL as a researcher into the genuine occult who cloaked his findings as fiction. In neither case does Derleth admit to the abundantly demonstrated fact that Lovecraft was a mechanistic materialist convinced that there were no “higher powers” with any fondness for humanity whatsoever. [via]