36 Faces: The History, Astrology and Magic of the Decans by Austin Coppock, in deluxe and standard hardcovers as well as a trade paper edition from Three Hands Press, may be of interest. 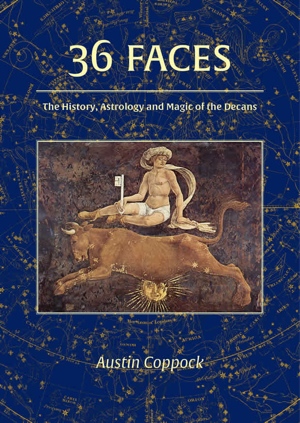 There is a thread that runs through over four millennia of astrological and magical history, a cord that binds ancient Egypt with the Hellenistic world, the Arabian empire, India, the European Renaissance and even touches the present. That thread is the Decans, a division of the earth’s sky into 36 sections. These 36 ‘Faces of Heaven’ are more than just a curious footnote in the history of archaeo-astronomy. First emerging in ancient Egypt, they have moved with the corpus of Hermetic material, reincarnating in the starry wisdom of culture after culture.

Ostensibly a gear in astrology’s encompassing clockworks, the Decans have also long been a key to accessing legions of spirits. For several millennia and in multiple cultures, magicians have looked at these 36 faces and seen gods, choirs of angels, hordes of demons, and a host of daimones staring back at them, each with its own unique powers. Far from going undocumented, this gallery of faces has been painted and drawn by a host of astrologers, sorcerers and artists, and they can be found on walls of Italian villas as well as in the pages of grimoires.

Weaving together astrology and magic, divination and sorcery, time and sky, this thread of esoteric history deserves more than the footnotes it has so far received. In this work, Austin Coppock follows the Decans through history, charting their trajectory through time and culture. Using the ring of keys which history provides, the 36 doors are flung open, revealing their mysteries to magician and astrologer alike. Each decan, its image, and its specific powers are examined in detail, as well as its permutations in the planetary aspects. Featuring original images specially created for each Decan by Bob Eames, 36 Faces is an invaluable resource for magicians, astrologers, and historians of magical semiotics.