Clavis Journal, Vol 3: Cipher and Stone from Ouroboros Press and Three Hands Press, due in September, but available for pre-order, in standard and deluxe editions, may be of interest. 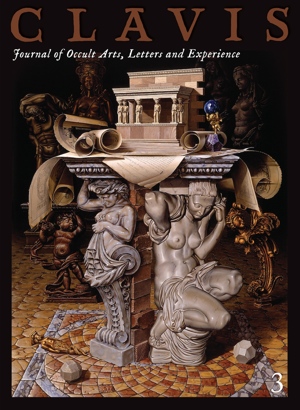 “At 216 pages, the new volume of Clavis features an outstanding grouping of authors and image-makers. Articles in this issue include ‘Our Lady Babalon and Her Cup of Fornications” by Gordan Djurdjevic, and esoteric astrologer Austin Coppock’s paean to dark and baneful starlight, “Death From Above”. Three adepts of the German magical order Fraternitas Saturni give voice to the magisterial arcanum of Saturn in the article ‘Listening to the Voice of Silence’. We are pleased to include ‘Rite of the Graal Evolute’, a previously unpublished ritual and art by the late English magus and scholar Andrew D. Chumbley. Gemma Gary invokes Bucca, the Cornish Witch-God in image, rite and magical exposition; Robert Hull examines the Qabalah of Quantum Physics in ‘Unity and Division’. Michael Howard explores the role of the first artificer of metal in ‘Masonic Mysteries of Tubal-Cain’, and Henrik Bogdan considers the esoteric role of Secrecy, the very flower of the Occult itself, in occult orders. In addition, we are also pleased to include rare occult texts relating to cheiromancy, witchcraft and the lore and magic of Mandragora – the Shrieking Root of the sorcerers.